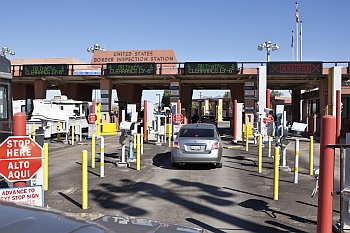 A recent U.S. DOT Office of the Inspector General audit of the Federal Motor Carrier Safety Administration (FMCSA) found the agency lacking in inspection resources at the U.S.-Mexico border as well as having a computer glitch that has prevented U.S. states from uploading Mexican driver conviction reports into CDLIS.

The audit also found that FMCSA needs to improve its ability to inspect buses at the border.

According to Bureau of Transportation Statistics, more than 421,000 buses carrying more than 5.6 million passengers entered the U.S. from Mexico during fiscal years 2011 and 2012.

“FMCSA has taken steps to improve passenger carrier safety at the border but has not taken sufficient actions to fully address our prior recommendations for improving its capacity to inspect buses,” the report says, referring to FMCSA’s 2009 agreement to revise its bus safety plan to include the frequency of required bus inspections and identify actions to eliminate obstacles to achieving inspection coverage, and to work with U.S. Customs and Border Protection and the General Services Administration to assess the safety and efficiency of the bus inspection space.

As to the truck safety review provisions mandated by Congress in 2002, the report notes that FMCSA’s inspection staffing at the border has decreased slightly, but the agency said it is training new applicants and reviewing its staffing requirements.

Additionally, a software disruption in FMCSA’s routing software – or Gateway – has prevented states from uploading Mexican driver conviction reports into CDLIS. FMCSA implemented alternative procedures during the disruption that allows inspectors to access information on Mexican commercial drivers, but states’ transmittal of Mexican driver conviction information to CDLIS has been delayed.

“The resulting backlog of convictions could potentially delay enforcement action against some Mexican drivers, posing a potential adverse impact on safety,” the report states.

FMCSA subsequently provided the inspector general with documentation that the backlog had been eliminated.

Despite the areas of concern, the report found that FMCSA “generally complies” with safety criteria established by Congress.

While citing FMCSA’s actions as “noteworthy,” the audit calls for “additional focus.”

“Robust border inspection processes and practices are important for ensuring FMCSA’s continued compliance with cross-border trucking provisions and the safety of vehicles entering the U.S from Mexico,” the report concludes.

The audit was published in late November and released to the public in December.

In a related story, the U.S. Supreme Court will consider and decide Jan. 10 whether or not it will hear the Owner-Operator Independent Drivers Association’s (OOIDA) case against the FMCSA’s cross-border pilot program with Mexico.

A federal appeals court in July rejected OOIDA’s request to rehear the case after it ruled in favor of FMCSA. That court, the U.S. court of Appeals for the District of Columbia, dismissed OOIDA’s arguments against the program, which included challenges to the qualifications of Mexican drivers and the disparity in standards they are held to relative to U.S. drivers.

The program began its third and final year in October and recently admitted its 14th carrier, Trasco, which received authority for four drivers and seven trucks to operate beyond the commercial border zone. Applications for entrance into the program are also pending for two other carriers.

Mexico has indicated it will reinstate retaliatory tariffs if the program is disrupted, according to the U.S. Department of Agriculture.

FMCSA said it needs 46 participating carriers to reach its target of 4,100 inspections, the number it needs to provide a statistically valid analysis of the participant’s safety performance.

Trains carrying intermodal containers will interchange at Eagle Pass, Texas, to and from Ferromex, Mexico’s largest railroad, which will operate trains between the border and Monterrey.

Union Pacific and Ferromex have reportedly made significant terminal, track and equipment investments for this new service.

Intermodal shipping incorporates multiple modes of transportation, in this case, truck and rail, to capitalize on the advantages of each mode. This form of transportation allows consumer and manufactured goods, such as clothing and appliances, to be transported across the border in a cost-effective and timely way.

Union Pacific is the only railroad serving all six Mexico gateways: Laredo, Eagle Pass, El Paso and Brownsville in Texas; Calexico, California; and Nogales, Arizona, according to the company.