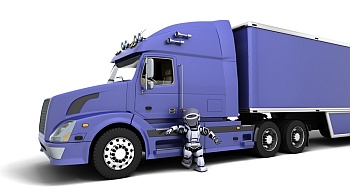 The Technology and Maintenance Council (TMC) of the American Trucking Associations’ Future Truck program has been looking at the future of trucking for three decades now and its latest survey of trucking industry officials offers up the following predictions:

Fuel economy is being driven both by fleet demand and by federal regulations to reduce greenhouse gas emissions (GHG). There already is, and will continue to be, an increasing focus on the power train as a whole, with the transmission, engine and axles all working together for the optimal fuel economy.

Fleets are realizing that they may be able to save fuel and upfront purchase costs by using a smaller or less powerful vehicle that more closely fits their needs, and that trend is likely to continue.

Todd Bloom, president and CEO of Mitsubishi Fuso Truck of America, describes this as a “trend to use the right vehicle for the right job.”

“Instead of getting more truck than you need so you’ll never be overloaded, it makes more sense to get that loaded 90 percent every day,” he says. “If you need more for the busy season, you can go out and rent what you need.”

Computer technology, from electronic driver vehicle inspections to telematics, may play the largest role in improved vehicle uptime. Truck makers are now offering telematics systems that communicate between the truck, the dealer/OE and the back office about any problems happening on the vehicle.

Beyond the next couple of years, we’re seeing a groundswell for alternative fuels, especially natural gas. More investment is being made in engine platforms to expand that portfolio, and that competition drives further advancements on the technology standpoint and also drives cost out of the offering.

Don’t count out other alternative fuels, such as advanced biofuels made from algae and other non-food stocks. Volvo and Mack believe DME, or dimethyl ether, is the fuel of the future. Hybrid, electric, propane, natural-gas-to-liquid, all will likely play a role in powering future trucks.

5. Changes in the cab

Expect more integration of in-cab technology into the OE dashboard. Both Freightliner and Peterbilt have showed concept trucks featuring a removable tablet in the dash that can display virtual gauges, navigation and instantaneous feedback on fuel economy and unsafe driving. The tablet can be removed when the truck is not in motion to perform electronic vehicle inspections or for the driver to use to connect with family members or other personal use.

Sleepers may get smaller as more fleets move to regional haul or hub and spoke type operations.

While autonomous vehicles are a long way out, the technology is there. Demonstration vehicles today are showing that’s very feasible.

Even with the advances in technology, the experts predict we will still need drivers for the foreseeable future.