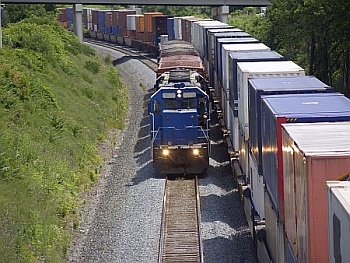 “The administration’s proposed budget misses the mark when it comes to the transportation needs of the U.S. economy,” said ATA President Bill Graves. “It provides no real funding solutions for the long-term health of our infrastructure and proposes massive new subsidies for a mode that moves a small proportion of America’s freight and passengers.”

Graves said freight railroads moved 14.7 percent of all domestic freight according to the latest statistics, which pales compared to the 68.5 percent moved by America’s trucking industry.

“While freight railroads and intermodal rail play small, but important roles in goods movement, the lifeblood of our economy is and will continue to be the U.S. trucking industry,” Graves said. “By mid-January, this industry moved as much freight as the railroads will move all year, and this budget proposes to re-direct funds from road and bridge projects that would improve capacity and ease bottlenecks to underwrite projects for an industry that continually crows about how self-sufficient it is.”

“It is also difficult to understand this Administration’s insistence on continuing to pour billions of dollars into an intercity passenger rail system that carries just one-tenth of one percent of passenger miles, while failing to provide the necessary resources to improve the safety and efficiency of the highway system, which handles 87 percent of passenger travel,” Graves added.

“Finding a long term, sustainable way to improve our nation’s roads and bridges is one of ATA’s top priorities,” said Byrd, president of Bulldog Hiway Express. “Using the proceeds from corporate tax reform, while creative, does little to address the long-term solvency of the Highway Trust Fund or to uphold the principle of users paying for the services they get, in this case, the federal fuel tax, which has not been adjusted in more than two decades to account for inflation and improvements in vehicle fuel efficiency.

“The fuel tax is, and will continue to be the most efficient and fair way of collecting revenue for highways and bridges and should be adjusted to reflect current economic conditions and needs,” Byrd said.

As part of his fiscal year 2015 budget, President Obama released his plan for a four-year surface transportation reauthorization.

The President’s plan calls for a new Transportation Trust Fund that would include a Highway Account, a Mass Transit Account, a Rail Account, and a Multimodal Account. The accounts for highways and transit would continue to receive user-generated revenue such as the gas tax and would also be supplemented with General Fund transfers that are offset by changes to the corporate tax code. The Rail and Multimodal Accounts would be funded through General Fund transfers.

The reauthorization proposal by Obama would follow MAP-21 programmatic structures for the most part, while also creating several new programs under FHWA, including: a Critical Immediate Investments Program (part of Obama’s “Fix it First” initiative, focusing on improving existing transportation assets and cutting down on structurally deficient bridges), a Freight Program (which aims to cut down on freight bottlenecks and improve efficiency in moving goods), and a Fixing and Accelerating Surface Transportation program (a discretionary program that would reward innovative solutions to transportation challenges).

Obama’s FY 2015 budget calls for $91 billion in funding for the U.S. Department of Transportation. That number is about $18 billion above current funding levels.