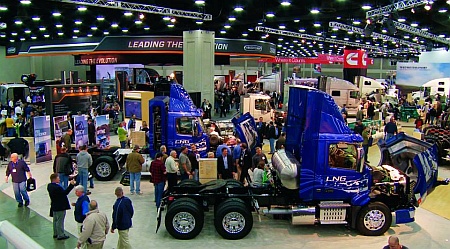 In addition to new technology and business practices unveiled at the recent Mid-America Trucking Show in Louisville, Kentucky, the trucking industry lifted the curtains on its new “Trucking Moves America Forward” (TMAF) image and marketing campaign.

The goal of the campaign, according to industry officials, is to market trucking to potential drivers, impart to the general public the integral role of trucking within each of their lives, show its impact on the economy and help change policy makers’ perceptions of trucking.

The Owner-Operator Independent Drivers Association (OOIDA) along with a number of other carriers, truck stop chains, media and manufacturers are behind the project.

“We have a great story to tell,” says Todd Spencer, executive vice-president of OOIDA. “We want to reach out to the public because America moves by truck.”

Kevin Burch, president of Jet Express and vice chairman of TMAF, is passionate about this project. He wants to bring all facets of the trucking industry together, including owner-operators and company drivers, as well as unionized and non-unionized drivers.

“We need to show exactly how passionate we are. America is not going to move unless we have professional drivers,” says Burch. “It’s imperative we understand how we are all connected and work together.”

The campaign has many goals, one of which is to ease the shortage of drivers that is expected to top one million over the next decade. Heavy advertising, social media, paid and earned media, and public affairs campaigns will be a part of the marketing efforts, according to Amos Snead of Story Partners, the agency assisting in the efforts. “We are always going to need trucks,” Spencer says. “If we don’t have the best out there, we will suffer for it.”

“Today’s modern truck drivers are skilled professionals and devoted family men and women, trained to focus on safety, efficiency and reliability while operating the safest and most sustainable trucks we have seen to-date,” said Steve Ponder, chairman, TMAF and vice-president of Great West Casualty Company.

“Trucking is an important industry to our country, nearly every consumer good touches a truck along its journey and we are excited to share what makes trucking so special with the American people,” added Ponder.

“Trucking is critical to the American economy, injecting more than $642 million into this country annually, and each person in the industry plays an important role in telling that story,” said Burch.

“We plan to share those stories in the coming year and beyond with various initiatives,” said Mike Card chairman, fundraising of TMAF and president of Combined Transport, Inc. “The entire industry is excited as this campaign encompasses every sector within the industry and we welcome everyone’s support.”

Card says today’s truck driver is a skilled professional who follows stringent safety guidelines and is experienced with the new and improved technologies that make trucks smarter, more fuel-efficient and safer than ever before.

Safety is perhaps where public opinion is most skewed. According to the U.S. Department of Transportation, large-truck crashes and fatalities drastically declined between 2000 and 2010.

In fact, the past few years have seen the lowest numbers in crashes and fatalities to date. And while these numbers have dropped, the miles traveled have increased.

At a time when almost 10 percent of the nation’s workforce is looking for employment, industry experts project the transportation industry will add 30,000 jobs this year alone.