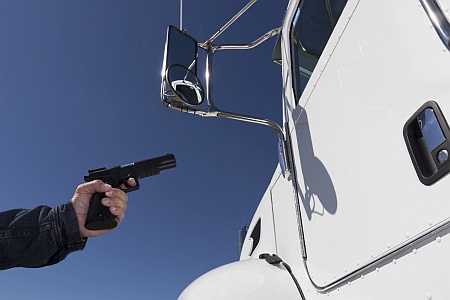 The winter of 2013-14 was one of the coldest on record and dropped the 10th largest snow cover on the U.S. since 1966, according to the Rutgers University Snow Lab.

The wintry weather disrupted much of the nation’s freight transportation network and created a “target rich” environment for cargo theft, according to insurance industry officials. Trucks sidelined by inclement weather make an attractive target for cargo thieves.

“What we’re finding is that when the supply chain gets disrupted such as by a massive blizzard or say a port worker strike, a lot of transportation companies start doing things outside of their normal ‘safe’ practices due to excessive shipment backlogs, etc.,” said Sam Rizitelli, national director for transportation at Travelers Inland Marine division.

“During ‘disruptive’ events, there’s confusion and companies are often shorthanded – especially if it’s a weather event,” he added. “Things begin to back up, there’s chaos, and so the normal procedures for handling freight get put aside. That creates an opportunity we see more cargo thieves trying to exploit.”

Scott Cornell, director of the Specialty Investigations Group (SIG) within the Inland Marine division at Travelers, used a Hurricane-induced port closure to illustrate this issue.

“When the port closes, now you have cargo container ships offshore that can’t unload; cargo within the port than can’t get moved; and trucks inbound to the port parked at truck stops, rest areas, and other locations unable to deliver their shipments,” he said. “All this freight – particularly on the trucks – is now idle and exposed, often in unsecured locations. It’s got nowhere to go and thus creates a ‘buffet’ of cargo for thieves to choose from.”

Some regions of the country have higher activity in cargo theft. “Generally speaking, the Southeast, South and West have seen more incidents of cargo theft, though we have cargo theft cases all around the nation,” said Frank Scafidi, director of public affairs for the National Insurance Crime Bureau (NICB).

“Why thieves target certain areas is more a function of perhaps less-traveled areas or more lucrative loads traversing certain corridors or routes in the nation,” he explained. “But warehouses are targets also and, in those instances, it is definitely the product that defines the crime. Among the most popular loads for theft are electronics – cell phones, computers – clothing, food and pharmaceuticals.”

According to research firm FreightWatch, there were 951 cargo thefts throughout the U.S. in 2013, the highest level of theft incidents on record. Experts say the threat continues to grow in the U.S. due to increased organization and innovation on the part of cargo thieves.

Hot spots are numerous, but the most notorious can be identified by the confluence of the major interstates: Dallas, TX; West Memphis, TN; Fontana, CA; and Atlanta, GA.

“Thieves seem to be finding and exploiting the volume and ease associated with consumable products – beverages, foodstuffs, detergent, etc.,” said Walt Fountain, safety and enterprise security director for TL carrier Schneider National. “It is very hard to distinguish stolen goods from legitimate goods in these categories, and often, the products are consumed by the time law enforcement gets a lead on their whereabouts – and it is hard to prosecute a thief when the evidence was eaten last week,” he added. ”

Fountain said one of the real challenges in combating cargo theft is shrinking law enforcement budgets and resources.

“Let’s face it – cargo theft doesn’t compete well for resources versus crimes against persons,” he said. “Even if the cargo thieves may be using their ‘profits’ to finance other criminal behavior, the nexus is difficult to prove.”

Fountain believes there should be more sharing of information within the industry to combat the cargo thefts.

“Illuminating the threat tactics provides us a better chance to combat the thieves,” Fountain explained. “A company shouldn’t have to personally suffer every hit in order to understand the threat environment. There should not be industry competition in the areas of security and safety. Industry improvement in these areas is in everyone’s best interests.”