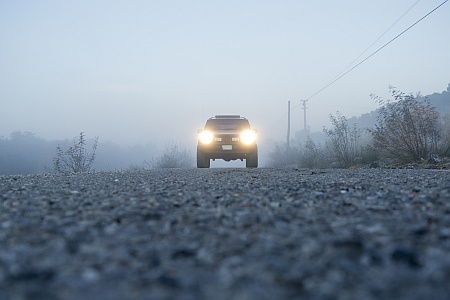 Across the United States, flashing your headlights at another vehicle can mean different things.

For some it is a way to tell an oncoming driver that they have their high beams on. Truckers often flash high beams to let a driver know they have reached a safe distance to complete a passing movement.

However, the most common interpretation of the flash of a high beam is a warning to other drivers that there is a speed trap ahead and they would be advised to ease off the gas pedal.

This coded warning from one driver to another is legal in some states and will draw a citation and a fine in others.

It is that inconsistency across the nation that is finding more and more drivers in court with free speech as their defense.

Last fall, Chris Hill was driving on U.S. 140 near Oregon’s White City when he noticed a sheriff’s deputy behind him and flashed a warning to an oncoming UPS driver.

Hill was ticketed and faced a $260 fine for improperly using his head lights.

Dave Fidanque, director of the American Civil Liberties Union of Oregon, noted the Oregon Court of Appeals overturned a traffic law prohibiting horn honking for non-traffic purposes on similar grounds in the 1990s after a number of people got tickets for honking in support of U.S. troops during the first Gulf War.

“If the motive of the sheriff’s deputies was in fact not to make the roads safer, but to raise more revenue from traffic enforcement, that would be even more reason why it should be unconstitutional,” Fidanque said. “If this is part of a pattern, then it probably would be worth us looking into it in more detail.”

In New Jersey, one state lawmaker agrees that flashing headlights is a form of free speech and has introduced legislation to support that position.

Assemblyman Ronald Dancer (R-Ocean) introduced a bill last month that would clarify that it is “permissible for the operator of a motor vehicle to flash his or her headlights in the direction of oncoming traffic to warn the operator of another motor vehicle of a traffic accident, a road hazard, or the presence of law enforcement officers enforcing the speed limit.”

“If law enforcement is using radar to combat excessive speed, a motorist who flashes the lights is having a positive impact, helping to slow the flow of traffic and improve road safety,” said Dancer. “However, if tickets are being issued for blinking the lights, frankly, that is an overly aggressive tactic to preserve the flow of easy money from speed traps.”

Such behavior is legal in New Jersey, according to a 199 appellate court ruling. The two-judge state panel ruled that the state’s law against misusing headlights “was never intended to prohibit a motorist from warning oncoming motorists that a speed trap lays ahead.”

Hayducka said he thinks officers still do stop drivers for flashing their headlights, because “you’re still blinding people with headlights.” Hayducka said he pulled drivers over for it himself, though he’s not sure if it was before or after the court decision.

“Really, that law, all it would do would be to make our jobs more difficult,” Hayducka said. “You’re distracting other motorists. You’re not supposed to use your headlights unless it’s a situation that warrants it. At least not with oncoming traffic.”

Assemblyman Dancer did not cite any specific instances in New Jersey, but referred to a driver in Ellisville, Mo., who in November 2012 was pulled over for flashing his headlights and fined $1,000.

The driver, Michael Elli, challenged the policy in federal court, and was backed by the American Civil Liberties Union. In February, a U.S. District Court judge in St. Louis sided with him, ruling that flashing headlights to warn drivers was protected speech.

“When you come down to it, this is a free speech issue,” Dancer said. “Common sense tells us a person should be able to look out for others and warn them of hidden dangers.”