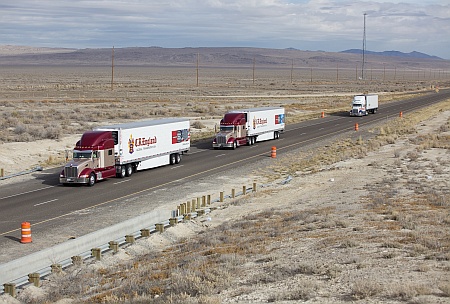 “We connect forward collision avoidance technology on a pair of trucks, mitigating the most common truck accidents.  Our platooning network operations center ensures that the trucks and drivers operate in the safest mode for the road and conditions. The pairing of the trucks links their safety systems, increases driver awareness, and saves fuel for both trucks.  The leading truck saves fuel as well,” said Peloton CEO Josh Switkes. “Our goal is to make Peloton-equipped trucks the safest and most efficient on the road,” he added.

The most important part of the system is the response time of the forward collision avoidance system. A human needs one to two seconds to react to an occurrence in front of the truck; however, it only takes the Peloton system a fraction of a second, according to the company.

Seeing the system in action convinced Osborne of its efficacy. An official for the Nevada Department of Motor Vehicles also expressed enthusiasm.

“Technology that makes us safer is worth exploring,” said Director Troy Dillard, who encouraged the cooperation of government agencies and private technology vendors.

Platooned trucks are not driverless. In fact, the drivers retain control of the system and of vehicle steering. It’s the automatic synchronization of braking and accelerating that allows the trucks to travel at closer distances.

Even when not in platoon mode, drivers can take advantage of the system’s collision avoidance, brake and tire diagnostics, and video displays of blind spots.

Peloton’s network operation center is being established nationwide and will work with trucks seeking a platooning partner on the road, including trucks from different companies, said Switkes. Peloton uses geo-fencing to limit platoon functions to roads that have been deemed appropriate for it.

More than a dozen fleets have contacted Peloton to express interest in becoming part of a pilot program.

The system was road tested in Utah with major trucking fleet C.R. England in 2013 and showed double-digit fuel savings and encouraging results in developing safer conditions for trucks and other motorists on the highway.

Peloton is building on similar platoon system technology that is being tested in Europe and Japan.

A four-truck platoon system was tested on a closed track in Tsukuba City, Japan and showed the short spacing improved fuel economy by an average of 15 percent.

“In addition, we expect this technology to contribute to safer driving,” Iwai said. “That’s saying something given that drivers and everybody else on the road will have to depend on the system’s fail-safe controls to ensure bulletproof operational safety since one error or mistake could rapidly turn into a catastrophic pile up.”

Europe’s Sartre Project, completed in 2012, demonstrated it is possible for cars and trucks to follow a lead vehicle controlled by a trained driver, according to Carl Johan Alquist, traffic product safety manager at Volvo. “Technically speaking, truck platooning is not that far away; it’s the other safety and functional issues that remain to be sorted out,” he said.

In the U.S, research by Partners for Advanced Transit and Highways (PATH), the University of California at Berkeley and Caltrans has demonstrated three-truck platoons.