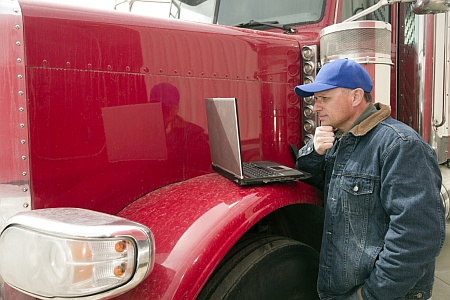 A study conducted by the Virginia Tech Transportation Institute (VTTI) for the Federal Motor Carrier Safety Administration (FMCSA) found that trucks operated with electronic hours-of-service recorders (EHSRs) had an 11.7 percent lower crash rate than those not so equipped and 5.1 percent lower crash rates for preventable crashes.

The study, conducted by VTTI’s Center for Truck and Bus Safety, comes with the disclaimer that the data was skewed toward larger for-hire carriers and may not be representative of the larger U.S. trucking population.

FMCSA announced in a May 12 Federal Register notice that the report evaluating the safety benefits of electronic logs had been placed in the docket on the proposed rule related to electronic logging devices and supporting documents for hours-of-service compliance.

The study included data from 11 carriers representing small, medium and large fleets, including a total of 82,943 crashes, 970 HOS violations and 224,034 truck-years that drove a total of 15.6 billion miles.

The report’s authors said that its results square reasonably with those in a 2009 study that was based on a far more representative sample of carriers but did not include exposure metrics or identify specific trucks that were equipped with EHSRs. “Taken together, the current study and the above-referenced 2009 study clearly show a safety benefit for EHSRs with respect to crashes and HOS violations,” the report concludes.

The Owner-Operator Independent Drivers Association (OOIDA) responded with criticism to the VTTI study.

“The study’s conclusion is flawed because it included all other types of crashes except those that supposedly would be prevented with electronic logging devices,” said OOIDA Executive Vice President Todd Spencer.

“We’d like to see well-trained drivers put into trucks instead of unproven technology. It is the hallmark of a bureaucracy to embrace billion-dollar mandates in the name of safety while all but ignoring the absence of even basic driver training for new drivers entering the industry,” he added.

The debate over electronic logging devices (ELD) comes because FMCSA proposed a rule that would require all commercial truck and bus drivers currently to adopt and use ELDs.

This proposal is the first step toward fulfilling the congressional requirement included in the July 2012 highway reauthorization bill that FMCSA mandate the use of ELDs. According to FMCSA, the proposed rule would significantly reduce the paperwork burden associated with hours-of-service recordkeeping for drivers and improve the quality of logbook data.

“This proposal will improve safety while helping businesses by cutting unnecessary paperwork – exactly the type of government streamlining President Obama called for in his State of the Union address,” said Transportation Secretary Anthony Foxx. “By leveraging innovative technology with ELDs, we have the opportunity to save lives and boost efficiency for both motor carriers and safety inspectors.”

As proposed, the mandate will take effect two years after the final rule is published. Since the final rule is not expected for at least another year, it will probably be 2017 before any trucks have to install ELDs. The proposal also includes a grandfather clause for carriers and drivers already using electronic logs that would allow devices that meet current standards two additional years before having to be replaced. Also, FMCSA expects that many devices already in use can be modified to meet the new standards by upgrading the software.

The proposal has garnered mixed reviews from the trucking industry. While some believe that ELD requirements are a good way to increase safety, others are concerned that it is a costly mandate that opens the door to harassment of drivers by trucking companies with only a minimal benefit to public safety.