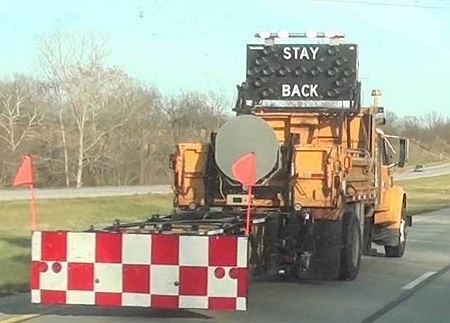 Missouri transportation officials have shelved a project using “sound cannons” to warn distracted drivers to slow down in work zones but remain interested in how the devices could enhance traffic safety.

LRAD Corporation of San Diego developed the devices for the U.S. military.

The LRAD models were mounted in the rear of MoDOT trucks and tilted about 90 degrees to directly face drivers. When a vehicle came too close to the truck’s rear, drivers heard a high-pitched sound and the message “slow vehicles ahead.”

Researchers used sound levels within standards recommended by agencies such as the National Institute for Occupational Safety and Health, according to Henry Brown, a University of Missouri traffic engineer.

The instrument, he added, appeared to perform as MoDOT officials had hoped, by prompting drivers to move over a lane. The average merging distance with the LRAD was greater from the truck than the average distance without it, he said.

Highway officials had pondered a pilot program this spring, but they postponed it because the devices were not available, according to Holly Dentner, MoDOT spokeswoman.

Missouri was the first state transportation agency to test the devices and the company will now consider trying to market to other states, according to E. Bryan Harvey, an LRAD spokesman.

The devices were developed to warn vessels from getting too close to ships, and have been used to protect convoys in Iraq, warn pirates on the high seas and disperse demonstrators in New York and Pittsburgh.

The city of Montreal recently purchased two of the sound cannons for riot control purposes. The devices were used at the G-20 Summit in Toronto and have received positive reviews for their ability to broadcast announcements to the public.

The LRADs can generate up to 140 ear-splitting decibels to disperse crowds. Montreal police say they will not pump up the volume unless the crowds become too unruly.

“I don’t see this as a weapon,” said Inspector Roch Deroy of the Montreal police. “It’s more of a means of delivering a clear message to a crowd or in a hostage situation. It delivers messages through walls,” he added.

Karen Piper, an English professor at the University of Missouri, observed the LRAD during demonstrations during the G-20 economic summit in Pittsburgh in 2009 and suffered hearing loss as a result. The police deployed an LRAD to communicate with and disperse demonstrators.

“I didn’t even know it existed,” Piper said. The sound it transmitted, she said, “was a high, screeching, siren-like sound, very loud and painful.”

The American Civil Liberties Union of Pennsylvania sued the city of Pittsburgh over the unit’s use, maintaining that Piper had suffered permanent hearing loss, nausea, pain and disorientation. Piper received a $72,000 settlement in 2012. She continues to suffer hearing loss in one ear that makes it difficult for her to distinguish some consonants, she said. She wonders whether drivers one day could suffer injuries similar to hers.

“I don’t think they should use it at all,” Piper said.

LRADs were first used for disaster relief after Hurricane Katrina in Louisiana.

The company sent six devices to the Colorado National Guard last year for land and air-based communication to broadcast to those affected by catastrophic flooding in northern Colorado and in 2010 the U.S. military used LRAD systems to assist with emergency communications in Haiti after an earthquake.

In 2011, Japanese disaster relief authorities used LRAD systems for mass communication and to coordinate search and rescue operations after the devastating earthquake and tsunami. In 2011 and 2012, Thailand’s department of disaster response deployed LRAD systems to support flood relief efforts.