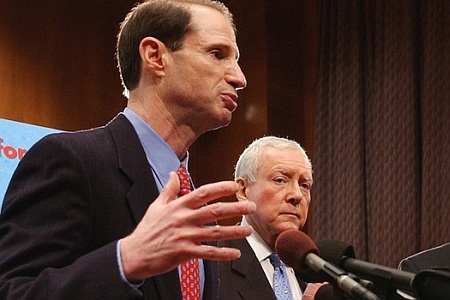 When Congress left Washington for the Fourth of July recess they did so with major transportation legislation yet to be enacted.

As a result, the pending fiscal cliff for the Highway Trust Fund draws perilously closer.

Sen. Ron Wyden (D-Oregon) tried to push through a six-month funding extension before the recess but got no traction in the Senate Finance Committee.

“It’s important for the committee to get something done, but also to get it done right,” said Senator Orrin Hatch of Utah, the top Republican on the committee.

With the Highway Trust Fund expected to be depleted as early as this month, about 112,000 construction projects and almost 700,000 jobs await word on new federal funding.

Buried in the massive transportation bills are provisions of special interest to the trucking industry.

The Senate is debating whether to repeal federal regulations that require truck drivers to take nighttime rest breaks, with some lawmakers arguing the rules have led to more daytime accidents while others saying they are critical to relieving fatigue.

The truck driver, Walmart employee Kevin Roper, had not slept for more than 24 hours, according to a criminal complaint filed in Middlesex County Court in New Jersey.

Under a federal law put in place last year, truck drivers must rest for at least 34 hours after working a 70-hour week, and the rest time – known as the restart period – must include two periods between 1 a.m. and 5 a.m. to ensure truckers get adequate nighttime rest. The law also caps daily driving to 11 hours and requires a 30-minute break every eight hours.

When the Senate transportation, housing and urban development appropriations bill came up for debate with an amendment suspending the time-of-day requirements on rest, Senator Cory Booker of New Jersey and Senator Richard Blumenthal of Connecticut were pushing to keep them in place.

“Requiring those drivers operating 80,000-pound trucks on busy roads to get some rest is not only common sense, it’s supported by science,” Booker said on the Senate floor. “The current rule…is preventing crashes, is preventing the loss of life.”

But Senator Susan Collins, a Maine Republican, and several trucker groups say the restart rules force truckers to drive during busy daytime hours, when more cars are on the road and they are more likely to get into accidents. Collins’s amendment would suspend the restart rules’ time-of-day restrictions and once-a-week cap for a year while the Federal Motor Carrier Safety Administration conducts a study assessing their impact.

Sean McNally, spokesman for the American Trucking Associations (ATA), a trade group, said lawmakers should be more concerned with issues of speed and distracted driving than fatigue.

In 2012, large-truck accidents killed about 4,000 people and injured more than 100,000 nationwide, according to National Highway Traffic Safety Administration data. In a 2006 Federal Motor Carrier Safety Administration study, 65 percent of truck drivers reported they often or sometimes felt drowsy while driving. Almost half said they had fallen asleep at the wheel in the previous year.

ATA has been the key proponent of suspending the restart rule until additional research can be completed.

Regarding the Collins amendment, ATA CEO Bill Graves said, “The ATA thinks pushing commercial vehicle traffic out to rush hour is a fatal flaw in the rulemaking that certainly negates any safety benefit.”

Graves claimed that in ATA meetings with the FMCSA, Administrator Anne Ferro and others have admitted recognition of the unintended consequences of the ruling but supported the implementation, anyway.

Phil Byrd, ATA chairman and president and CEO of Charleston, South Carolina-based Bulldog Hiway Transport, cited issues at his company with the HOS restart provisions. “I asked Anne Ferro,” he said, ‘how can a driver that takes 40 hours off after 160 hours be less rested and less safe than a driver who takes 34 hours off after 168 hours?”