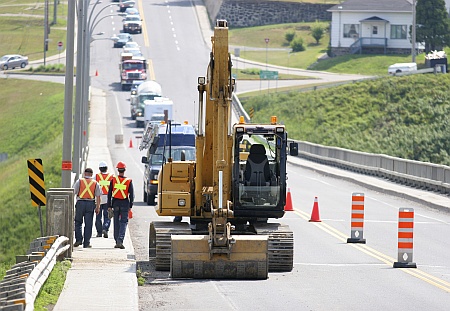 The issue is a massive one. The Highway Trust Fund is staring at a $15 billion shortfall in 2015.

The ongoing crisis in transportation funding has a chorus of voices once again advocating for a radical rethinking of the traditional federal and state roles in the transportation arena.

“The gas tax has declined in value drastically since it was last increased in 1993—even as the price of gas itself has tripled. As a result, both the main Highway Trust Fund and its transit account (often called the transit trust fund) are bankrupt.”

The trust fund’s highway account is expected to dip below the critical $4 billion level as early as this month. If Congress doesn’t act and the fund is allowed to dwindle that low, the U.S. Department of Transportation says it would be forced to slow reimbursements to states—more than 117,000 road and transit projects could be delayed and as many as 700,000 construction jobs could be put at risk.

While a gas tax increase could shore up the trust fund—at least temporarily—many believe such a move is highly unlikely to win bipartisan support in an election year.

Aggarwala advocates raising the gas tax, but says Congress, in its current polarized state, has been unable to do it. So he offers another option.

“A strong, smart, well-funded federal program would be great,” he wrote. “But if Congress can’t pass one now, it should just get itself out of the way, by eliminating the federal gas tax entirely and cutting Washington’s role in surface transportation.”

Aggarwala argues such a move would actually lead to more investment in infrastructure, enhance state autonomy, streamline decision-making and encourage greener transportation policies since without federal transportation dollars, many car-centric states would choose to reduce spending on new roads.

In the current situation, many states are scrambling to plan but face an uncertain future.

“As you may know, in about a month, the balance of the Highway Trust Fund’s Highway Account will likely dip below a critical threshold at which the U.S. Department of Transportation (DOT) must begin to implement cash management procedures. Upon doing so, we will take every reasonable and appropriate step to fully reimburse your state for as long as possible. To be clear, however, if the trust fund becomes insolvent, DOT will likely need to delay some reimbursements owed to your agency. We understand and regret that such measures may be necessary as the current construction season is ongoing. We have and will continue to sound the alarm bell that hundreds of projects and thousands of jobs are at risk,” wrote Foxx.

Across the country, many transportation departments are already delaying work.

The American Association of State Highway Transportation Officials (AASHTO) predicts as many as 6,000 highway projects may be halted.

In Vermont, the transportation agency has an agreement with its state treasury to help with cash flow in case the federal government slows down its reimbursement schedule.

“It’s something we are very, very concerned about,” said Sue Minter, deputy secretary of the Vermont Agency of Transportation. “In our fiscal year that starts July 1, we anticipate spending $685 million to improve our system across the state, and nearly 60 percent of those are federal dollars. We have obligations to pay bills that are submitted to us by our contractors, and we need to reimburse those bills. What we expect may happen is the Federal Highway Administration will reduce how much they pay us. We will have a very serious cash flow problem.”

With that potential situation looming, Vermont is facing what Minter calls a “real slowdown” for future projects. It may also lead to fewer jobs for Vermonters, she added.

On top of hurting construction jobs, the lack of funding will also reduce the overall safety of the nation’s roads, said David Goldberg, communications director for Transportation for America, an advocacy group.

“We’re falling seriously behind in investing in our infrastructure,” Goldberg said. “We are behind just about every other developed nation. We used to lead the world. It does seem like earlier generations built this stuff for us, and we take it as a gift from heaven. We haven’t been willing ourselves to invest what we need.”