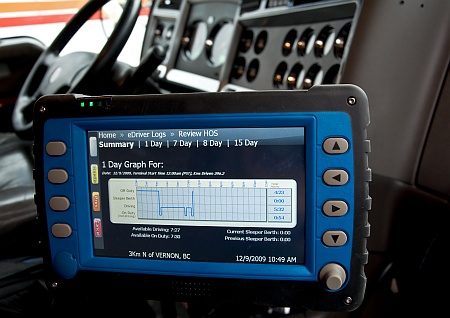 The Federal Motor Carrier Safety Administration (FMCSA) is seeking input on the proposed mandatory use of Electronic Logging Devices (ELD) and the agency has been getting an earful.

By the end of June, FMCSA had received more than 1,700 comments on the proposed implementation with a mix of support and opposition.

The American Trucking Associations (ATA) asked the agency to swiftly issue a mandate requiring commercial truck drivers to use ELDs for Hours of Service compliance.

ATA said it has supported mandatory ELDs for HOS compliance and because of that, had “advocated for the MAP-21 provision mandating a rulemaking to require ELDs.”

ATA also asked the agency to provide incentives to encourage adoption of the technology prior to the mandate.

“We know these devices can improve safety, so it makes sense for FMCSA to do all they can to encourage adoption of electronic logging devices,” ATA President and CEO Bill Graves said.

He added that in support of safer highways, ATA was standing behind FMCSA “as it advances a common sense solution to improving the safety of our nation’s highways.”

At the core of ELD proposal is the requirement that drivers who fill out paper logs must eventually switch to electronic logs. The proposal also covers technical standards for the devices and the supporting documents that regulators need to confirm compliance. And it sets requirements to ensure that electronic logs are not used to harass drivers.

A number of owner-operators said that ELDs have the effect of pushing drivers harder during their duty time.

James Bennett said he is a 30-year owner-operator with no accidents and is not sure he’ll stay in the business if he has to use an ELD.

“I do not need an ELD,” he said. “It does nothing for me and my operations or my bottom line.”

“I will have no choice but to drive in traffic, adverse weather conditions, and/or while fatigued because I can’t take a nap … because the clock is tick, tick, ticking away,” said Ryan Allison.

On the other hand, some individuals support the rule.

Charles Bolin said he thinks ELDs should be required on every truck.

“I would compare an E-log rule to a rule requiring employers to use electronic time clocks rather than handwritten time cards to prevent payroll fraud,” he said. “It makes good business sense and it keeps local companies honest about whether their drivers really qualify for the local driver logbook exemption.”

Henry Albert put it this way: “Quite simply, electronic log books bring accountability and compliance to the trucking industry.”

The Commercial Vehicle Safety Alliance (CVSA), which represents the police who enforce the rule, is concerned about the schedule for compliance.

FMCSA proposed a four-year plan that will complicate enforcement, according to CVSA.

During the first two years, there will be three ways to keep track of hours: on paper, with grandfathered automatic onboard recording devices (AOBRD) and with ELDs. Carriers that use paper logs will have to plug in ELDs at the end of two years, but those that use AOBRDs or pre-rule ELDs will have another two years to bring their systems into compliance with the mandate.

CVSA is proposing that there be a three-year grace period for all carriers.

“In this scenario, any existing electronic devices for recording driver RODS would no longer be permitted after the third year,” CVSA said. That would give suppliers time to meet the demand, carriers to budget the change and enforcement agencies to train their staff.

CVSA also wants the agency to be sure it accounts for what it will cost enforcement agencies to implement the rule. It suggested that the agency include police equipment and training in its regulatory impact analysis.

Under the proposed rule, drivers will manually enter a change in duty status, which is neither automatic nor necessarily accurate, the group said.

“FMCSA embarks on this ill-advised program without any evidence that currently available ELDs, which require the manual input of changes in duty status, will provide the slightest improvement over paper logbooks which also depend upon manual input of such information,” OOIDA said.

OOIDA also contended that the agency’s cost-benefit analysis is deficient. It said the analysis does not address the question of who should bear the cost of ELDs, and it contains no credible data on the relationship between ELDs and hours-of-service compliance.