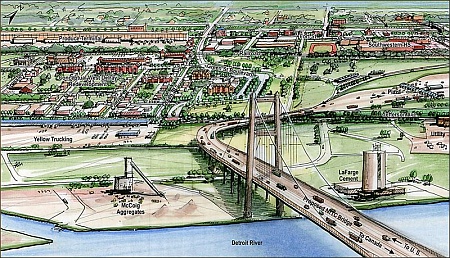 Michigan Governor Rick Snyder and Canada Minister of Transport Lisa Raitt recently announced appointments to the International Authority that will oversee construction of a new publicly-owned bridge between Windsor, Ontario and Detroit, Michigan.

The span will compete with the existing Ambassador Bridge. Its private owners are opposed to the building of the new span and have unsuccessfully tried several legal maneuvers to stop it.

The cost for the project is estimated to be around $4 billion and is set for completion in 2020.

Kristine Burr and Geneviève Gagnon were appointed by Canada and Michael D. Hayes, Birgit M. Klohs and Matt Rizik have been appointed by Michigan. Burr will also serve as the chairperson of the International Authority. A third Canadian member will be selected by the Windsor-Detroit Bridge Authority (WDBA) in the near future.

Raitt also announced the appointments of board members Michele “Michael” Cautillo as chief executive officer, Mark McQueen as chairperson of the board of directors and William Graham and Caroline Mulroney Lapham as directors.

Burr has had a career with the government of Canada over the past 40 years, most recently as assistant deputy minister, policy for Transport Canada.

Gagnon has been the president of XTL Transport since 2012, a Canadian transportation, logistics and distribution services company.

Hayes presently serves as president and CEO of the Midland Center for the Arts. He previously founded Main Street Consulting, specializing in community relations and economic development following his retirement as vice president of executive relations with Dow Chemical.

Klohs is the president and CEO of The Right Place, the regional economic development organization for the retention, expansion and attraction of business in Western Michigan.

Rizik is the chief tax officer for Rock Ventures, the umbrella entity formed to provide operational coordination, guidance and integration to a portfolio of more than 40 businesses ranging from sports and entertainment to innovative internet start-ups.

Cautillo has been involved in the planning of the new crossing between Windsor, Ontario and Detroit, Mich. for the past eight years in his capacity as a partner with Deloitte, the prime project and financial advisory contractor for the project. During his tenure with Deloitte, Cautillo was a key player in its Infrastructure Advisory and Project Finance practice. Prior to this, Cautillo spent 23 years with the Ontario Ministry of Transportation.