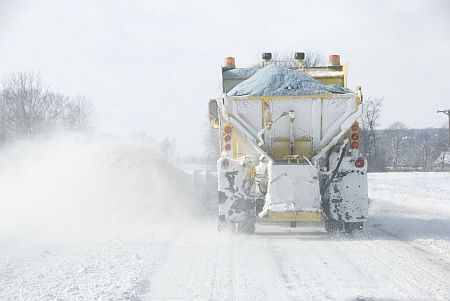 Last year’s record-setting snowfalls and bitter cold temperatures depleted road salt stockpiles and are driving up prices for many states new prepping for this winter.

The Ohio Department of Transportation (ODOT) received bids in excess of $100 per ton, triple the price paid last year. The rocketing prices prompted Midwest Salt of Fort Wayne to import 171,600 tons from Morocco via the Port of Toledo.

Andrew Thiele, Midwest Salt’s president, said soaring domestic prices and lack of supply “allowed us to bring salt from overseas into the Midwest.”
“Typically, we’re purchasing from domestic producers as well, but this was the next-best option,” said Thiele.

ODOT bid two salt contracts this year — one for summer replenishment of stockpiles depleted by last year’s extreme weather, the other for resupply once winter starts.

Bids were requested for state delivery points in each of Ohio’s 88 counties.

The replenishment bids ranged between $40 and $70 a ton for all counties but the resupply bids were another matter. In 11 counties, the lowest price was $100 or higher — including a high of $165 per ton for Defiance County delivery.

ODOT rejected those bids, which along with Defiance applied to Lucas, Ottawa, Williams, Fulton, Sandusky, Seneca, Wood, and Henry counties in northwest Ohio and the Youngstown-area counties of Mahoning and Trumbull.

In Minnesota, state and city officials say they have an ample supply of road salt for the winter, but they paid higher prices to get it.

Last year’s harsh winter wiped out reserves in Minnesota and led to shortages in other states throughout the Snowbelt. That has triggered higher demand and prices for salt this year, said Mark Klein, a spokesman for Cargill’s road salt business.

The Minnesota Department of Transportation (MnDOT) will spend about $20 million on salt this winter, a modest four percent more than last year. Prices rose from $71 per ton to $74 this year, said agency spokesman Kevin Gutknecht. The agency will buy about 277,000 tons for the season.

“MnDOT is in good shape,” he said. Like MnDOT, Minneapolis placed its order in early summer. Still, the city will pay 13 percent more for the 15,000 tons of salt it will use for the season. Prices rose from $58 per ton last year to $66, said Public Works Director Mike Kennedy.

The price spike comes after salt prices last year were at a six-year low courtesy of mild winters in 2011 and 2012, Klein said. The winter of 2013-14 served up a polar vortex, frequent snowfalls and prolonged cold, which forced many municipalities to use their entire supply.

“We’re already working Saturdays at our mines, which is unusual for this time of year,” said Klein. “That combined with the bidding demand from states, counties and municipalities is up quite a bit on expectations that it’ll be another snowy winter.”

In New England, cities and towns are facing 20-50 percent jumps in price. Andrea Woods, who directs the purchasing program for the Franklin Regional Council of Governments, said an unusually high demand for road salt from southern states last winter made price increases inevitable.

The price increases are a lingering reminder of last winter’s severe weather around the country.

“The quantities that were anticipated that’s usually just used in the Northeast were being stretched thin in order to keep folks in Alabama from sliding off the road.”

“Most communities like us will buy all of our stuff in September and October. And before you’ve even put anything in the field or plowed a flake of snow, you can almost be in the red in your snow accounts,” says Cignoli.

Despite the price hike, Cignoli says crews plan to have enough salt at hand this winter to ensure the roads don’t become a safety hazard.