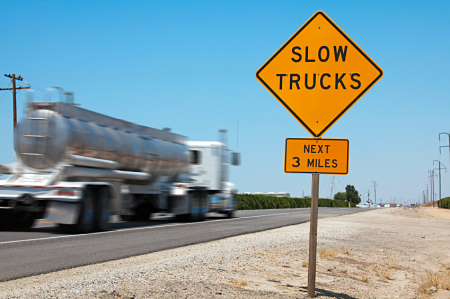 U.S. speed limits are rising nationwide, especially in wide-open Western states, reflecting the more-harried lifestyles of a fast-paced nation, according to a Los Angeles Times report.

But many safety officials are scratching their heads over a perilous trend they say will lead to more — and more ghastly — fatalities. Each year, excessive speed contributes to one-third of highway deaths nationally.

“The research is clear and consistent on the safety consequences of raising speed limits,” said Russ Rader, a spokesman for the Insurance Institute for Highway Safety. “Higher speed limits get people to their destinations faster, but there’s always a cost: Ultimately, there will be more severe crashes and more deaths on those roads. At the end of the day, it’s simple physics.”

Thirteen states have increased speed limits since 2005 — including Georgia, Illinois, Maine, New Hampshire, Kentucky and Ohio — most of those topping out with limits of 70 or 75 mph, according to statistics from the highway safety group.

But in the West, officials have kicked things up a notch further: This year, Idaho and Wyoming raised their top speeds to 80 on some stretches of interstate. Legislators in Montana — which in 1995 dropped all speed limits until the state
Supreme Court reversed the rule change three years later — are considering an 85 mph top speed to match areas in Texas as the nation’s Mt. Olympus of speed limits.

For many, 5 mph doesn’t seem like much, cutting only two hours from a cross-country trek at 80 mph instead of 75. Still, many state officials say they’re not encouraging more speed — just adapting the limits to reflect speeds people already drive.

Highway safety experts blame the newest need for speed on what one calls “simple peer pressure.”