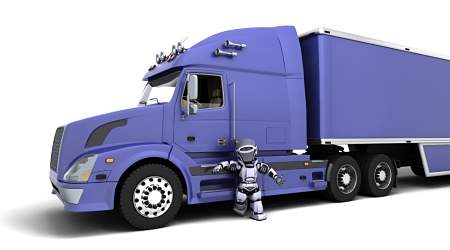 Advances in technology will make trucking safer in the future. The only question that remains is how soon the future will come.

For example, a NHTSA-funded study conducted by the University of Michigan Transportation Research Institute concluded that a more advanced crash avoidance technology that engages truck brakes automatically before an impending crash could prevent as many as 300 fatalities a year and yield $3.1 billion in economic benefits.

But critics say getting new technology implemented takes too long.

“They’ll research everything to death, even though manufacturers have started to put this stuff in because their customers want it,” said Henry Jasny, vice president and general counsel of Advocates for Highway and Auto Safety, a watchdog group funded partly by the insurance industry. “We don’t know why it’s not happening, other than a lack of political will.”

“We will continue to use all the tools at our disposal, including the deployment of new technologies, to ensure that drivers are well rested and alert behind the wheel,” said Transportation Secretary Anthony Foxx.

The American Trucking Associations (ATA) said it supports new technologies that improve vehicle safety and driver performance as long as the benefit is proven, and there is a reasonable cost. In 2010, the ATA petitioned for requirements that trucks have devices that can limit their speed, a change that is now in the early stages of rulemaking.

Still industry groups and the government are sometimes at odds.

“NTSB often makes recommendations based on high-profile crashes, sometimes anomalies, not on the primary causes of truck crashes or what would be most the effective solutions for reducing the number of crashes,” said ATA spokesman Sean McNally.

Meritor WABCO, a joint venture between Meritor Inc. and WABCO Holdings Inc., has a system that uses radar to alert drivers of lane obstructions and pending collisions. It applies braking automatically when it senses an imminent crash and automatically adjusts cruise control to manage safe following distances. Outfitting a truck would cost about $2,000 to $2,500.

NHTSA is in the final stages of requiring all trucks to include electronic stability control, which uses computer-controlled steering and braking to prevent rollovers, at a cost of about $1,160 per truck. The agency estimates the requirement could save 49 to 60 lives a year and prevent 649 to 858 injuries.

One of the most promising safety advances is a fatigue-monitoring device that measures eyelid movement.

Delphi Automotive is developing one called the Driver State Monitor that sounds an alarm when it senses the driver is blinking or moving his head like a person about to fall asleep. It’s slated to go on sale in 2016, according to Kristen Kinley, a spokeswoman for the Troy, Michigan-based company.

Delphi says it has solved a technical challenge that plagued earlier systems.

U.S. DOT spokesman Bill Farber said most fatigue monitoring technology is still too unreliable or not cost-effective for mass use.

“Where we are able to make a difference in preventing crashes, we do so — even when we are met with frequent and fervent opposition from some stakeholders,” Farber said.

Freight companies are now equipping trucks with sensors that generate continuous data feedback to operational centers. Safety managers can review video from the trucks to determine instances of fatigue or distraction, according to Steve Mitgang, CEO of SmartDrive Systems, a San Diego-based tech firm that recently added Brinks to its client list.

“When you have video proof, the results are remarkable,” said Mitgang. “Behavior changes dramatically right away.”

SmartDrive costs about $500 in equipment per truck, with a monthly fee of $40-$50 per truck, per month for monitoring.

“What you’re going to see in the future for safety systems is more cameras in the vehicles, and not just cameras for watching ahead, but cameras that process, that develop algorithms, that identify the difference between a deer and a person or a cyclist ahead of the truck,” said Jason Spence, product manager for Volvo Trucks. “Not only will they identify these things, they calculate reasonable telemetry to identify if the truck has the potential to run into this other object on the road. If so, it’s going to alert the driver of the truck to the potential danger and it’s going to stop the truck to keep a collision from occurring. Cameras are going to be a big deal in the future going forward,” he added.