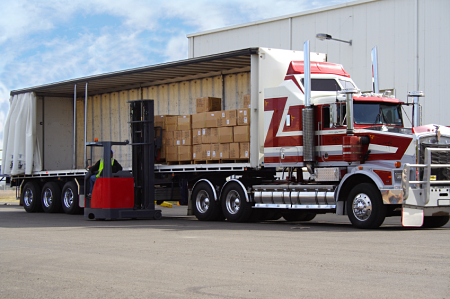 A New York startup called Transfix has joined companies such as DashHaul, CargoMatic and Keychain Logistics vying to become the “Uber” of trucking.

Drew McElroy’s startup has a smartphone app that matches shipments with drivers.

Transfix is already being tested by Barnes and Noble, Samsung, SuperValu and J.Crew, and cutting their “deadhead” runs (time driving without cargo) in half or more, according to McElroy. Last year the company received $1.8 million in funding from Bowery Capital, Lerer Hippeau, Founder Collective, TriplePoint Capital and others.

Tranfix fits into the larger phenomenon of consumer technology being extended into massive existing industries. Annual American trucking spending is estimated at $600 billion. It’s been surprisingly easy to break into the market, McElroy said,
because large retailers and brands are increasingly willing to work with startups — and because some 90 percent of truck drivers already have smartphones.

“They spend so much time in the cab,” McElroy said, “that on a consumer level, they’ve really embraced technology.”