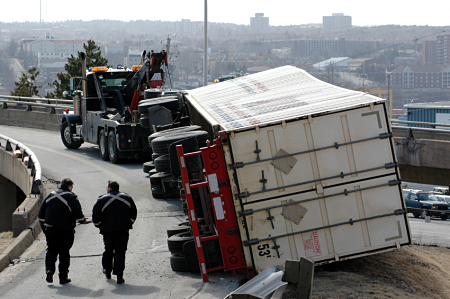 The Centers for Disease Control (CDC) says 317,000 crashes involving large trucks were reported to law enforcement in 2012, with an economic impact of $99 billion, according to the center’s Vital Signs report.

About 2.6 million workers in the US drive trucks that weigh over 10,000 pounds. After dropping to 35-year lows in 2009, the number of crash fatalities of truck drivers or their passengers increased between 2009 and 2012. Approximately 700 drivers of large trucks or their passengers died in crashes in 2012, and an estimated 26,000 were injured. About 65 percent of on-the-job deaths of truck drivers in 2012 were the result of a motor vehicle crash. More than a third of the drivers who died were not wearing a seat belt.

“We know that using a seat belt is the single most effective intervention to prevent injury or death in a motor vehicle crash. However, in 2012 more than 1 in 3 truck drivers who died in crashes were not buckled up, a simple step which could have prevented up to 40 percent of these deaths” said CDC Principal Deputy Director Ileana Arias. “Employers and government agencies at all levels can help improve truck driver safety and increase seat belt use among truck drivers by having strong company safety programs and enforcing state and federal laws.”

The Vital Signs report includes data from the National Survey of US Long-Haul Truck Driver Health and Injury, conducted by CDC at 32 truck stops along interstate highways across the United States in 2010. Key findings from the survey include:

“Using a seat belt is the most effective way to prevent injury or death in the event of a crash,” said Dr. Stephanie Pratt, coordinator of the National Institute for Occupational Safety and Health (NIOSH) Center for Motor Vehicle Safety. “The smartest strategy for overall safety is to prevent truck crashes from happening in the first place. Employers can help prevent crashes and injuries through comprehensive driver safety programs that address other known risk factors such as drowsy and distracted driving.”