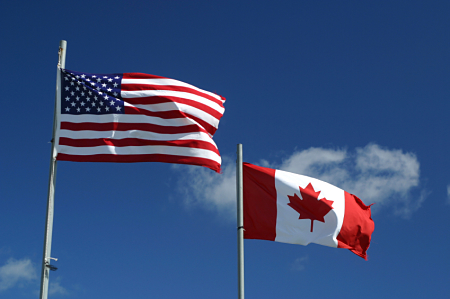 Shipping by highway, rail and water between the U.S. and Canada was enhanced recently when government officials signed a deal to streamline border inspections, according to a report in the Detroit News.

The proposed change could mean shifting some American customs inspections to the Canadian sides of the border crossings at Detroit and Port Huron, and allowing U.S. customs agents to carry weapons while stationed inside the Canadian border.

The deal — years in the making as part of the Beyond the Border Initiative — sets out a legal framework allowing law enforcement agents into each other’s countries to conduct customs, immigration and agricultural inspections inside the border. It is a process already in operation at eight Canadian airports, including Toronto.

“This agreement will help facilitate the legitimate trade and travel that keeps our economy thriving as we maintain utmost vigilance to the security of our borders,” U.S. Homeland Security Secretary Jeh Johnson said. “We remain committed to our deep partnership with Canada, a true ally, neighbor and friend of the United States.”

A new process for advance government screening of business shipments and individuals could relieve congestion and shave off time while traveling between the two countries, officials say.

“It is extremely helpful for goods to move quickly across the border in a way that still protects residents in both countries,” Snyder spokesman Dave Murray said Monday, but noted the administration still needs to review the agreement.

The crossing between Detroit and Windsor is the busiest along the U.S.-Canada border, carrying more than 20 percent of all merchandise trade between the nations through the Ambassador Bridge and Detroit-Windsor Tunnel.

“It means the same number of officers at the border can process more trucks, and those officers can spend more time on those trucks who do require more attention,” said Douglas George, the Canadian consul general in Detroit. “Both our countries are very interested in ensuring there’s still a very high level of security.”

Maryscott Greenwood, an adviser to the Canadian American Business Council, said she expects arrangements for the Detroit-Windsor crossing would move quickly after the agreement receives legislative approval because of how busy and important it is.

“There’s always a complicated dance that you do in Detroit-Windsor with the various stakeholders, so that will remain to be seen,” she added, referring to the private ownership of the Ambassador Bridge.

The re-clearance operations would require approval by both Canada and the United States. Johnson said there will be “some negotiation” that goes into each border-crossing site, and “this agreement even spells that out.” The deal will be implemented at select sites “where it makes sense,” he said.

The trucking industry applauded the agreement as a step toward easing costs and increasing predictability at the border, although David Bradley, president and CEO of the Canadian Trucking Alliance, doesn’t see Detroit-Windsor as a top candidate for a pre-clearance site.