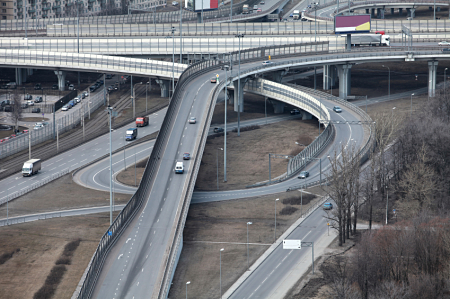 Highway off and on-ramps, many of them of antiquated design, are proving to be danger zones for truck drivers, according to a report in Bloomberg News.

Bloomberg reports that though they accounted for just 3.3 percent of all large-truck crashes, rollovers were responsible for more than half of the deaths to drivers and their occupants in 2012, the most recent year for which data is available.
That’s 300 truck occupant deaths and 3,000 injuries every year. And among the 2.6 million workers in the U.S. who drive trucks that weigh more than 10,000 pounds (4,500 kilograms), crashes are the leading cause of on-the-job death, according to the Centers for Disease Control and Prevention.

Overworked, distracted and sleepy drivers are causes of rollovers. But so too are outdated highway engineering and growing gridlock as a booming trucking industry puts ever greater strain on the nation’s aging roadways. Truck tonnage hauled jumped to an all-time high in January, the American Trucking Associations reported. Truck freight may rise 5.3 percent this year from 4 percent in 2014, according to FTR Associates data compiled by Bloomberg, as job growth spurs U.S. consumer spending.

“Because so many curves were made 40 years ago, they don’t have the banking needed for the trucks of today,” said Steve Niswander, vice president of safety policy at the Groendyke Transport trucking company in Enid, Oklahoma. “But to lengthen out and expand cloverleafs in probably 50 areas in the United States would take billions — and I mean with a B.”

Nowhere do mid-century roadways and 21st century congestion collide with such deadly force as in Atlanta, where a tangle of twisting roadways and densely packed moving traffic combine to create America’s extreme tipping point. More than
200 trucks have flipped around Atlanta since 2001, according to a study by the American Transportation Research Institute. And more than 200 people have died in truck rollovers in Georgia during that time.

The Top 10 rollover hot spots in the Atlanta area all involve exit ramps that require a rapid reduction in speed and often have sightlines obscured by bridges or the curvature of the road. Many lack adequate signs and flashing lights to warn of impending rollover risk.

“Rollovers can be quite violent at the last phase of it,” said John Woodrooffee, a scientist at the University of Michigan Transportation Research Institute in Ann Arbor. “The trailer goes over first, and then it can wind up like a spring and snap the cab over. Ejection or partial ejection from the cab is the highest causes of death.”

The National Highway Traffic Safety Administration last month sent a proposed rule to the White House for review that would mandate electronic stability control to take over braking on big trucks, like the technology now required on sport-utility vehicles, pickups and cars. While industry opposition has held up the regulation, NHTSA says it could save 60 lives a year and prevent 2,329 crashes.

“The delay is costing us lives,” said Woodrooffee, who conducted research for NHTSA for the proposed rollover regulation. “Without a doubt, electronic stability control is one of the most effective crash avoidance technologies for heavy trucks on the market.”