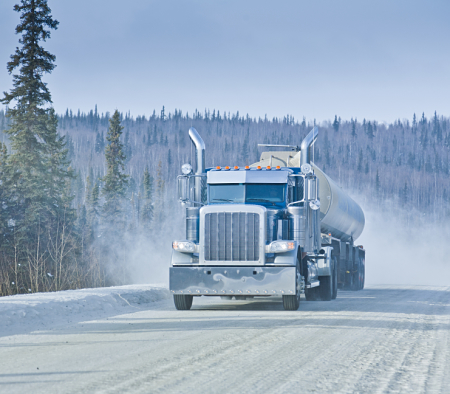 Alaska’s famed Ice Road, Dalton Highway, that links Alaska cities and the oilfields up north, has been closed to regular traffic due to flooding conditions, according to a report in International Business Times.

Recently, Alaska’s Department of Transportation & Public Facilities (ADOT & PF) temporarily opened the Dalton to small convoys of about 30 trucks carrying critical loads to drive a single open lane in either direction at a time. Though the road remains closed, the department announced that it had allowed 204 vehicles to pass through by the end of the day.

The road flooded due to an overflow from the Sagavanirktok River.

The road has been closed for more than a week, forcing Gov. Bill Walker to declare a state of disaster to loosen up funds and permit requirements so ADOT & PF could double down on its efforts to carve a roadway out of the mess. The agency has already exhausted its emergency funds and plans to request federal money to cover the remaining costs. Alaska’s Senate Finance Committee has committed $5 million to the cause.

“You’re standing on a road that is three feet of ice,” said Meadow Bailey, public relations officer for ADOT & PF. “It almost looks like you’re on a glacier — everything is very blue, it’s white and blues for as far as you can see.”

Trucks that continued to drive the route as conditions worsened sloshed through several feet of water and at times drove alongside a rushing river that ran higher than the road itself.

On a typical day, at least 100 truckers would make the 15-hour drive from Fairbanks to Prudhoe Bay to carry fuel, food, equipment and other supplies to workers who are staffing oilfield operations for BP, ConocoPhillips, ExxonMobil and a host of other companies.

The Dalton Highway’s natural disaster comes at a bad time. There is a narrow window between January and May, when trucks can access remote sections of the oilfields by driving over temporary ice roads to places that typically are only accessible by barge or airplane. One of those areas is Point Thompson, where ExxonMobil has invested $2 billion to build a natural gas plant.