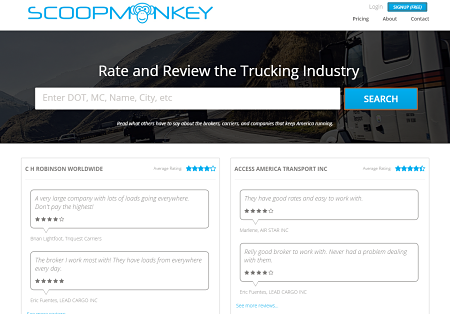 A Virginia-based online startup is gaining traction in the trucking world, according to a recent article in Richmondbizsense.com.

ScoopMonkey, a website that lets users rate and review members of the trucking industry, such as drivers, trucking companies and shipping brokers, is finalizing a deal this month to give it a boost of visibility.

The company is working to integrate its services with Truck It Smart, a site where truck drivers go to find loads of freight to transport.

The deal means that users on Truck It Smart will see ScoopMonkey’s user-generated ratings and reviews in their search results.

ScoopMonkey co-owner Eddie Peloke said the relationship is intended to drive traffic to ScoopMonkey’s site and increase its users, which currently stand at about 1,100 companies. There’s also a financial incentive involved.

“We’re giving them the data to put on their site to give us visibility,” Peloke said of the Truck It Smart deal. “For any customer we get, there is a revenue-sharing plan.”

Peloke said if subscribers come to ScoopMonkey from another site like Truck It Smart, ScoopMonkey will give a cut of the subscription money to that referring company – when it starts charging for membership.

Peloke and Pat Hull launched the ScoopMonkey site in 2013 and spent the following year fine-tuning it and marketing at trucking trade shows. Peloke is a former web developer for trucking sites including Getloaded, another site where truckers can find freight to ship.

Brokers, companies and drivers can rate each other on professionalism, communication, and timeliness on a scale from 1 to 5.

It’s free to register on the site to find ratings of other users and post reviews, but ScoopMonkey plans to eventually offer paid subscriptions. It will also look to sell ads on the site. The company has not yet produced any revenue, and Peloke would not say how much has been put into the company so far.