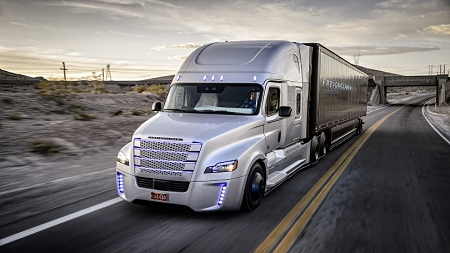 In ceremonies at the Las Vegas Motor Speedway May 5, Nevada Gov. Brian Sandoval officially granted the first license for an autonomous commercial truck to operate on an open public highway in the United States to Daimler Trucks North America (DTNA).

At the event, Daimler AG board member Dr. Wolfgang Bernhard and Gov. Sandoval took part in the inaugural trip of the Freightliner Inspiration Truck in autonomous mode with Dr. Bernhard at the controls.

“Nevada is proud to be making transportation history today by hosting the first U.S. public highway drive for a licensed autonomous commercial truck. The application of this innovative technology to one of America’s most important industries will have a lasting impact on our state and help shape the New Nevada economy,” said Gov. Sandoval. “The Nevada Department of Motor Vehicles has been closely monitoring the advancements being made in autonomous vehicle development and reviewed DTNA’s safety, testing and training plans before granting permission for this demonstration of the Freightliner Inspiration Truck.”

The ceremony included Gov. Sandoval affixing a state license plate to the truck.

“The autonomous vehicle technology we are showcasing in the Freightliner Inspiration Truck will help reduce accidents, improve fuel consumption, cut highway congestion, and safeguard the environment,” said Dr. Bernhard. “Daimler Trucks North America is committed to developing the latest technology to meet our customers’ needs and delivering the best commercial trucks in the world. We are proud to get this vehicle on the road here today.”

Nevada was selected as the demonstration location because it is one of four states, plus the District of Columbia, with laws regulating autonomous vehicle operation. Nevada legislation passed in 2011 and 2013 regulates the testing and operation of autonomous vehicles. The legislation includes commercial trucks and sets standards specifying the number of miles an autonomous vehicle must have been tested in certain conditions before it can be granted a license to be driven in Nevada. Daimler obtained a special permit from the Nevada Department of Motor Vehicles to operate the Freightliner Inspiration Truck on public roads near Las Vegas after supplying state officials with detailed information on the safety systems in the truck and the training program for the drivers.

“Freightliner Trucks has been setting the standard for commercial vehicle design and technology for nearly 75 years,” said Dr. Bernhard. “We selected Nevada to unveil the Freightliner Inspiration Truck because it is one of only four states that require special licensing. Our goal was to not only showcase what is technologically possible, but to do it in a regulated environment with safety standards and other oversight requirements.”