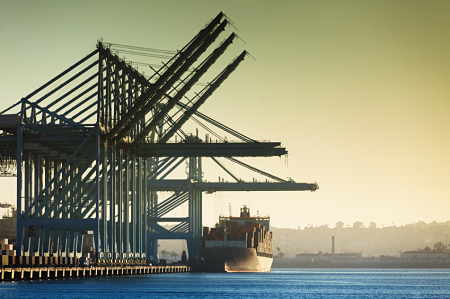 Delays in the supply chain are causing severe problems for truckers and shippers on the West Coast, according to a report in the Contra Costa Times.

Reporter Karen Robes Meeks reports that cargo containers filled with some 40,000 pounds of citrus picked from the Central Valley can sit for up to a month in a truck yard miles from the ports of Los Angeles and Long Beach.

A study by the National Retail Federation and the National Association of Manufacturers estimates that the West Coast ports alone contribute nearly $2 billion a day to the nation’s economy. In response to congestion bottlenecks at the ports of Long Beach and Los Angeles, businesses throughout the region had to resort to paying more to ship goods by air or reroute shipments to other ports, and in some cases cut hours or their workforce to make up for profit losses.

Analysts cite many causes, including bigger ships hauling more goods at once, a lack of trailers used to haul goods away when cargo arrives, and recent rancor between the International Longshore and Warehouse Union and the terminal operators who employ them.

Consolidation in the shipping industry is adding to the problem. Companies are increasingly forming alliances to save money by loading a patchwork of cargo onto a single massive ship; before, companies shipped only their own cargo on smaller vessels where it would be picked up at a designated terminal. The change has made it difficult for truckers to find the right containers to haul to businesses.

This particular problem is so bad that Jon Slangerup, the head of the Long Beach port who once ran Canada’s FedEx logistics, compared finding cargo to picking different colored eggs from an Easter basket.

The congestion is hitting businesses hard. Gardner recently had two options when five of his containers filled with citrus were delayed at the local ports: either take the fruit off the ships and sell it domestically, or let it rot at the docks. The produce was supposed to be on a ship bound for Asia, but was delayed because dozens of other ships were anchored at sea, waiting to be unloaded.

“By the time the boat got here, it was a month,” said Gardner, the director of trucking operations at Three Rivers Trucking Inc. “They had us take those five containers off that ship and back to the packing house because they would have never made it when it arrived.”

“This is the motor of our local economy, and it’s a big engine in the world economy,” LaBar said. “And if this isn’t fixed soon, it’s only going to get worse.”