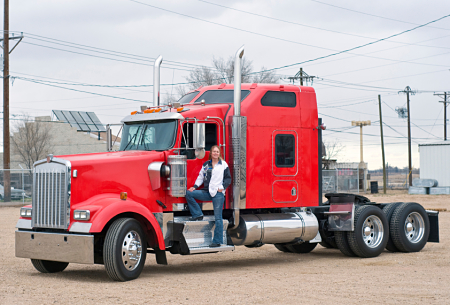 Female truckers are sliding into long-haul cabs as companies seek to end a U.S. driver shortage, and they’re proving to be better behind the wheel than men, according to an article in Bloomberg Business.

That’s no surprise to Stephanie Klang, 57, who used to drive in a team with her former husband. She stays on the road alone for up to five weeks and lives out of her truck with her cats as companions. “We’re more patient.”

“It’s important to kind of rebuff the myths,” Leathers said in an interview at an industry conference in Dallas. “They are winning in multiple categories across the fleet.”

Trucking companies see women as a large untapped labor pool that may ease a driver shortfall that’s expected to grow to 400,000 by 2017. Job-recruitment campaigns are being planned, including at Werner, targeting women by highlighting the industry’s increased salaries and updated fleets with new creature comforts such as larger sleeper cabs.

“We want to cast the net as wide as we can cast it,” Leathers said, “It’s an opportunity for the industry.”

More women have taken the wheel, according to the American Trucking Associations. They accounted for 5.8 percent of the 3.4 million U.S. truck drivers last year, compared with 4.6 percent in 2010. National safety figures don’t get broken down by gender, the group said.

“They do a great job,” he said, and are proving to be more cautious and attentive behind the wheel. He said about 16 percent of the Chattanooga, Tennessee-based company’s 2,400 drivers are women.

More women are willing to go solo on the road, said Swift Transportation Co. COO Richard Stocking. He estimated that 6 percent to 7 percent of his 19,000 drivers are female, and about half of those drive alone.

Cleaner terminals, schedules that guarantee home time, automatic transmissions and safer truck stops have all been crucial to attracting and retaining female drivers, said Werner’s Leathers. The company is planning a campaign with print ads and radio spots to encourage more women to apply.

“Most of us are looking for any viable source of new talent,” he said. “I don’t think we’ve done a good job marketing to women.”

Life on the road has gotten easier for women, said Klang, who drives a Kenworth big rig for Con-way Inc. When she started driving in 1980, there was no power steering, sleeper cabs were cramped, truck stops were dirty and crime-ridden and, worst of all, the showers were all located in the men’s bathroom.

“I’d have to get up at 2 a.m. and they’d close the men’s room for me,” said Klang, who lives in Joplin, Missouri. “Now, the showers are all private and clean.”

Her advice to women contemplating a behind-the-wheel career: “You will have down time in the truck,” she said. “Make the truck your home.”

Freight companies, shippers and truck manufacturers also are paying more attention to women and their needs, said Char Pingel, membership director for the industry group Women in Trucking, which was founded in 2007. Changes can range from allowing pets in the cab to designing seats that are more adaptable to women to “no-touch” cargo that doesn’t require heavy lifting.

“Women don’t know they can do the job,” Pingel said. “It used to be burly truckers who endured without all the modern conveniences.”

People should expect to see more women behind the wheel of big rigs on the highway, and that’s a good thing, Werner’s Leathers said.

“Those drivers right now are driving safer,” he said, without providing specific details. “The stats are there. They do a nice job.”