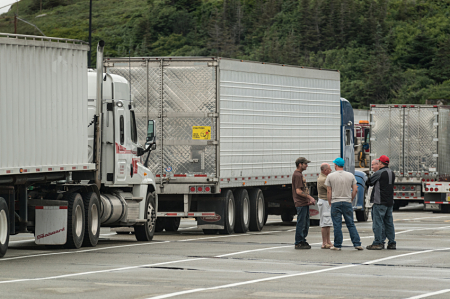 The trucking industry will need to hire 890,000 drivers in the next decade to replace retirees and meet rising demand, and companies are already pushing up pay to avoid falling short, according to a new study by the American Trucking Associations.

The Wall Street Journal reports that the industry group estimates that trucking companies will have to bring on an additional 47,500 drivers this year to smoothly handle customers’ orders, a figure that would grow to 73,500 next year if the economy picks up speed. The labor crunch is likely to worsen in coming years because drivers tend to be older—an average age of 49, compared with 42 in the wider workforce—and the industry will see more retirements.

Shippers could count on plenty of trucks to move their cargo in the years after the recession, when demand plunged and unemployment spiked, leaving a surplus of drivers available to haul freight. But an expanding U.S. economy since then and a steady increase in imports has soaked up much of that excess capacity.

Shipping costs are rising as companies raise driver pay and take other steps to make sure they have enough trucks available, though delays caused by a lack of capacity are still rare. The ATA warned of more severe problems if trucking companies aren’t able to recruit more drivers.

“If the trend stays on course, there will likely be severe supply chain disruptions resulting in significant shipping delays, higher inventory carrying costs, and perhaps shortages at stores,” the report said.

Trucking companies have raised pay sharply since the economic recovery gathered speed in 2011, with particularly large increases in the last two years. About half of for-hire truckload carriers—companies that fill a single truck with shipments from one customer for long-distance transport, typically to distribution centers or factories—offered sign-on bonuses averaging $1,500 each in 2014, the ATA said.

Those measures helped bring down driver turnover in that wing of the trucking industry from nearly 100% in 2012 to just over 90% last year, though that means a typical company still needs to replace nearly all of its drivers on a regular basis.

There are about 1.6 million tractor-trailers on the road today driven by professional drivers, according to the ATA. Of the 890,000 new hires needed by 2024, 45% would replace retiring drivers and about a third will be needed to handle growing demand, the report said, with the rest necessary to replace workers who leave the business for other reasons.

Covenant Transport, a truckload carrier based in Chattanooga, Tenn., needs to hire about 3,000 drivers a year, said Robert Hatchett, vice president of recruiting. The company began offering a guaranteed minimum salary to some drivers this summer, a bid to increase the appeal of jobs where income is often based on the number of miles driven.

“We know an even greater capacity crunch is coming, and we’ve got to make being a professional truck driver as attractive as possible,” he said.