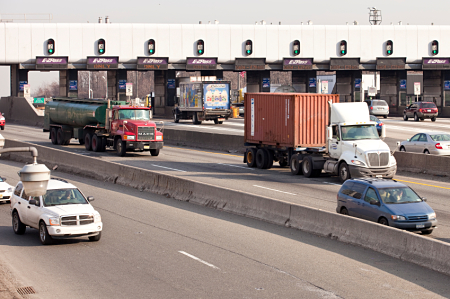 Warning of “potential legal consequences” if lawmakers embrace Governor Raimondo’s trucks-only tolling proposal, the Rhode Island Trucking Association proposed an alternative that relies instead on hikes in the diesel tax and truck registration fees, according to an article in the Providence Journal.

“We have always stated we want to be part of the solution, but tolls are not the answer,” said Christopher Maxwell, president of the Rhode Island Trucking Association. “Our plan creates a revenue stream over the next four years totaling just over $220 million dollars which happens to be the exact number being floated in RhodeWorks to repair 453 bridges outside of the 6/10 connector.

“After year four,” Maxwell said, “the plan will produce a yearly revenue stream of $25.9 million. This revenue stream could be bonded by the RIDOT to address the 6/10 connector or the entire package could be bonded to address all of the projects that RhodeWorks envisions. And our plan starts immediately without expending $43 million on gantries that will not begin to be constructed until 2018.”

Here are the specifics of the truckers’ proposed alternative to Raimondo’s bid for legislative approval for a toll-financed bridge repair plan, financed by a $600 million revenue bond that will cost a projected $1.1 billion over 30 years. The Senate-passed version of her “RhodeWorks” legislation does not specify the location of the overhead tolling gantries, the size of the tolls or the specific bridges slated for reconstruction.

This is the truckers’ proposed alternative:
• Increase the current 34-cent diesel tax by 18 cents to produce an estimated $10.8 million annually. By way of comparison, Connecticut’s gas tax is 55 cents.
• Increase truck registration fee by $500 per year to produce a projected $1.6 million annually. The truckers’ association says Rhode Island currently has the lowest truck registration fee in New England.
• Drop the proposed tax credits and other sweeteners the governor proposed last June to reduce the new cost of the new truck tolls on Rhode Island registered businesses, and redirect the $13.5 million to bridge and road maintenance.
• Refinance so-called “GARVEE bonds” floated to finance earlier road repairs, to produce $121 million in potential savings the first four years. (The truckers’ acknowledge that Raimondo’s plan already counts on these projected savings.)

“Our plan brings a predictable revenue stream to address Rhode Island’s deteriorating roads and bridges without the uncertainty and risk contained in the RhodeWorks proposal,” said Maxwell.

Maxwell said this is very troubling, because the traffic assumptions that the Raimondo team relied “are not accurate and will greatly affect projected revenue streams…and the governor has already admitted that if revenue projections do not pan out her only recourse would be to increase the tolls on the trucking industry.”