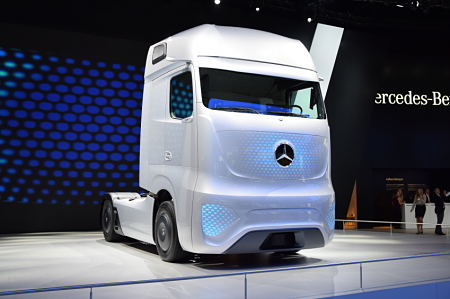 Could autonomous trucks one day replace drivers on long-distance hauls?

That’s the question the trucking industry is trying to answer. For now, it seems like humans will keep their jobs, but they’ll soon be assisted by self-driving features. Some believe these innovations could enter the mainstream within the next five to 10 years, helping big rig businesses hire and retain more drivers and making the industry safer and more efficient overall, according to an article in the Huffington Post.

“From driver retention and fatigue management, these technologies could take the cognitive activity out,” Daniel Murray, vice president of research at the American Transportation Research Institute, told the Post. “It could be extremely beneficial.”

Trucking is vital to the United States economy, moving over $700 billion worth of goods annually as e-commerce surges past brick-and-mortar sales and retailers ramp up services like free return shipping. The long-haul industry has tens of thousands of open positions, but recruitment is difficult and turnover is high, since the occupation demands tedious hours behind the wheel and often weeks spent away from family.

Companies have begun offering bigger paychecks in an effort to attract more employees. Putting enhanced rigs on the road could draw in additional drivers — particularly millennials.

“If we turn these trucks into a mobile computer, they’ll have a much higher comfort level,” Murray said. “This might be one of the carrots that allows us to open to a new generation that we’ve had trouble attracting.”

What’s more, equipping rigs with self-driving software could significantly reduce the burden on the human driver. The most grueling long-haul shifts stretch as long as 11 hours, and fatigue is a leading factor in the 4,000 annual deaths that result from large truck collisions.

Long-haul drivers need to be constantly alert, shifting direction slightly to avoid something on the route or balancing against a strong gust of wind from the side. Self-correcting sensors in the truck would compensate for minor disturbances and let the driver relax, said Nady Boules, an independent auto consultant in Detroit who formerly led General Motors’ electrical and control systems research lab.

Autonomous controls would also help drivers manage blind spots, monitor vehicle activity around the truck, make decisions about when to turn brakes on and keep drivers in lanes if they begin to drift.

Advocates of self-driving trucks also highlight economic benefits to the new tech. Software-operated trucks can drive faster and much closer to other trucks, shielding each other from wind resistance and allowing trips to be completed quicker. Research has shown that platoons of these trucks could use up to 10 percent less fuel.

Humans can’t drive fast enough or safely enough while maintaining a short distance between vehicles, Boules said. “In order for these trucks to drive in convoys, it has to be automated, like a train that is hooked together, but electromagnetically, using sensors,” he added.

Under current models for semi-autonomous vehicles, a driver would remain at the wheel to take control when necessary, even when self-driving features are activated. An 18-wheeler unveiled by Daimler earlier this year, for example, has an autopilot feature that can manage the truck’s basic functions on long patches of highway, giving the driver some rest on monotonous routes.