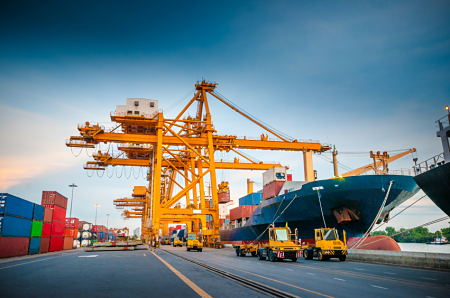 For the first time in at least a decade, imports fell in both September and October at each of the three busiest U.S. seaports, according to data from trade researcher Zepol Corp. and reported by The Wall Street Journal.

Combined, imports at the container terminals at the ports of Los Angeles, Long Beach, Calif. and around New York harbor, which handle just over half of the goods entering the country by sea, fell by just over 10 percent between August and October.

The declines came during a stretch from late summer to early fall known in the transportation world as peak shipping season, when cargo volumes typically surge through U.S. ports. It is a crucial few months for the U.S. economy as well: High import volumes can signal a confident view on the economy among retailers and manufacturers, while fears of a slowdown grow when ports are quiet.

Economists are divided as to whether the peak season slump signals a short-term hiccup for the U.S. economy, or marks the start of a sustained period of weakness. Some say the slump is being driven by businesses that have cut back on imports because of a weak economic outlook, which could point to sluggish global growth ahead. Others say it is a side effect of a massive inventory buildup that took place earlier in the year.

Despite the weak peak, imports in the first 10 months of the year at the nation’s busiest ports are still up four percent from a year earlier, Zepol data show. Rather than ordering huge shipments of goods in the late summer and early fall, more businesses are stocking up throughout the year and holding on to inventories for longer.

“There was a little bit of overdoing it in the beginning of the year,” said Ethan Harris, co-head of global economic research for Bank of America Merrill Lynch. “Once we adjust to it, I would expect that business picks up again, shipping picks up again, container imports should pick up again.”

Some companies, including FedEx Corp. and Amazon.com Inc., are predicting a record holiday season, which would go a long way toward moving that process along.

But the missing peak season has been a major headache for trucking companies, railroads and steamship lines. One large maritime carrier, Singapore’s Neptune Orient Lines Ltd., told investors there was “no peak season” in North America as an explanation for a $96 million quarterly loss.

Some of the country’s biggest trucking companies and railroads have recently reported weaker-than-expected earnings. Many have cut the rates they charge customers as demand sagged during what is usually their strongest months. For trucking companies in particular the turnabout has been abrupt, with some companies pivoting from expressing concerns about tight capacity to worries about future profits in the space of a few weeks.

Whether it proves a temporary drag or not, the inventory unwind has a long way to go. Nationwide, the seasonally adjusted ratio of inventories to sales at U.S. retailers, wholesalers and manufacturers in September was at 1.38, up from 1.31 in September 2014 and the highest reading for that month since 2001, according to the U.S. Census Bureau.

Sportswear company Under Armour Inc., homewares seller Pier 1 Imports Inc. and VF Corp., which owns fashion brands including The North Face and Wrangler, are among the companies that have in the past month flagged high inventories as a problem.

Private business inventories grew by a record $223 billion in the first half of 2015, which IHS Inc. chief economist Nariman Behravesh called “twice the sustainable pace,” raising concerns that reduced inventory investment would be a drag on gross domestic product.

“Instead of taking that extra money that [low fuel prices] are generating and going on a shopping spree, consumers are being more conservative,” said Rosalyn Wilson, a supply-chain analyst with Parsons Corp. “It’s bad for the global economy because it means we’re not purchasing.”

Last week, the consumer goods-focused ports of Long Beach, Calif. and Oakland, Calif., both reported year-to-year declines in imports in October, another sign that retailers have scaled back their orders from overseas after seeing inventories pile up earlier in the year.

Fernando Rios, who owns Orion Intermodal, a fleet of eight trucks that transports shipping containers from the docks at the port terminals in Elizabeth, N.J., says this September was the slowest he has seen in 25 years in the business.

“At this time it’s supposed to be very busy, but it’s not,” he said. Only five of his eight trucks are currently running, and he has had to turn away drivers looking for work. Last year in September, he was moving 25 to 30 containers a week; this year it has been between 8 and 12.

Trucking companies are expected to hire hundreds of thousands of drivers in the coming years, but may scale back those plans if they need to run fewer routes. The trucking industry cut 2,800 jobs between August and October, according to the Labor Department.