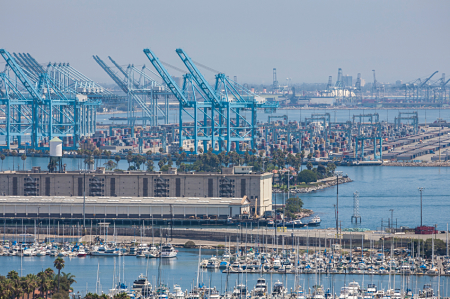 The year began with the city of Long Beach in the middle of what was shaping up to be a national crisis — labor strife at West Coast ports and its resultant slowdown of shipping activity, according to a year-end review article in the Long Beach Press Telegram.

Container ships stretched for miles down the coast waiting to be unloaded, businesses were delayed in receiving goods and leaders in Long Beach and Los Angeles were trying to broker a truce between dockworkers and the terminal operators who employ them.

Labor negotiations ended up being resolved before spring, and container volumes at Port of Long Beach gained sufficient momentum to put the complex on pace to reach pre-recession levels.

The port and goods movement industry are so vital to the local economy that the standoff between longshore workers and their bosses — as well as continuing labor issues in the trucking business — are two of the more important Long Beach business stories of 2015.

Anyone who spent time during the first weeks of this year standing along the Long Beach shoreline and gazing to the Pacific Ocean likely saw a long line of container ships whose crews had to endure long waits before being able to deliver cargo.

Prolonged contract negotiations between the International Longshore and Warehouse Union and the Pacific Maritime Association were so strained when 2015 began that on the second day of the year, workers and their employers traded allegations of bad faith tactics when employers decided to put fewer dock workers on the job after dark. Employers contended they weren’t the ones to first resort to high-pressure tactics, contending the longshore union was to blame for withholding highly-skilled workers needed for night shifts to be run efficiently.

The strife continued until U.S. Labor Secretary Thomas Perez intervened in late February, threatening to force labor negotiators to leave their San Francisco meeting spot for the frostier environs of Washington, D.C. Perez said on the night when a deal was finally announced the shipping slowdown had become such a problem that retailers were unable to keep goods in stock while “perishable foods were rotting at our ports.”

In the months since, cargo volumes at Long Beach returned to healthy levels. Port officials announced earlier this month they are on pace to exceed 7 million container units for the first time since the Great Recession.

Southern California’s trucking industry continued to face a critical question in 2015: Should the drivers who haul goods to and from the local ports be treated as independent contractors or full-fledged employees?

The Teamsters union has long supported the efforts for truckers who want to be classified as employees and would thus be eligible to join a union and engage in collective bargaining with trucking firms.

Most of Southern California’s port truckers work as independent contractors and the Harbor Trucking Association, a local business group, has asserted drivers can actually earn more money if they work as contractors.

The issue is not fully resolved, but those in favor of truckers being classified as employees won a victory shortly before Christmas when the California Labor Commissioner’s office determined nearly 40 drivers who had worked for Pacific 9 Transportation deserved to be classified as employees and were collectively owed about $7 million, if the decision stands.