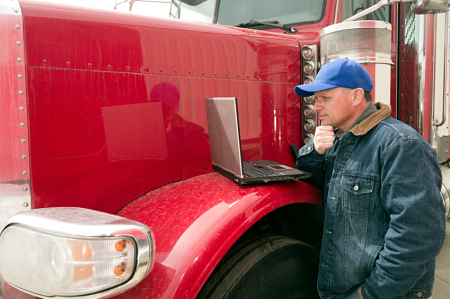 For his entire career in truck driving, Bryan Spoon has tried to move toward being his own boss.

A third-generation trucker, he started driving in the military, which lasted ten years. After leaving the service, he bought his own truck in 2004, and leased it to one company for a while. Then he became independent, picking up jobs on the spot market, hauling loads from as far south as Georgia all the way up to New England and out to Kansas City.

But now, a new federal regulation is making him feel as if that freedom is being taken away. Under final rules published this month, he and more than three million other drivers have until the end of 2017 to buy and install an “electronic logging device” that connects to his engine and broadcasts his speed and location to the shipper, replacing the log sheet that truckers have kept for decades, according to an article in the Washington Post.

“I run a safe, compliant business. I never had any issues with hours of service. So what does the government get out of monitoring me?” Spoon says. The government won’t actually be looking over his shoulder day-to-day, but could ask for the records if it suspects he’s violated rules that govern the hours he can spend on the road. He’s more worried about shipping companies tracking his every move.

“These ELDs are going to allow the company to say, ‘why are you stopping?’” Spoon says. He thinks that could be the final straw for truckers who’ve grown more impatient with each new restriction — and indeed, some polling shows that the mandate is broadly unpopular, since it represents a loss of control. “The industry is going to lose a whole section of very safe drivers who could work for a few more years and are just going to call it quits.”

Spoon isn’t installing the electronic logs just yet, though. The day after the Federal Motor Carrier Safety Administration published the new rule , on Dec. 11, the Owner Operator Independent Driver Association petitioned for review by the 7th Circuit Court of Appeals. It worked the last time around: In 2012, courts vacated the agency’s first attempt at a rule, saying it hadn’t done enough to prevent harassment of drivers.

The new regulation comes with stronger protections against coercion and harassment, allowing drivers to report any attempts by trucking companies to make them spend more time on the road than is allowed. Still, the driver’s association says pressure can come in subtler forms that wouldn’t necessarily constitute a violation.

“The technology is used simply to push drivers. You can call that harassment or coercion, but it is absolutely the opposite of safety,” says Todd Spencer, the association’s executive vice president. “They will certainly imply that ‘you’re creating a very, very bad situation for us, and if you don’t get from A to B to C, there might not be a load waiting for you when you get there.’”

If it sticks, the mandate will have been a long time in coming — and the independent drivers are basically the only ones who have opposed it. Highway safety advocates and the American Trucking Associations, which represents many large trucking companies that have already adopted electronic monitoring, say the mandate will enhance compliance with hours-of-service rules by preventing drivers from falsifying their log books. That had been a widespread practice in the past, as truckers might fudge times slightly to avoid having to spend an extra night somewhere if they had reached their hours limit.

“The industry turned a blind eye to all that. In today’s environment, there is no blind eye,” says David Roush, president of a consulting firm called KSM Transportation Advisors. Plus, from the company’s standpoint, knowing what drivers are up to allows them to maximize the efficiency of each trip. “By having transparency into what the true situation is, companies are able to ensure time that the driver is spending is productive, and not just sitting around,” Roush says.