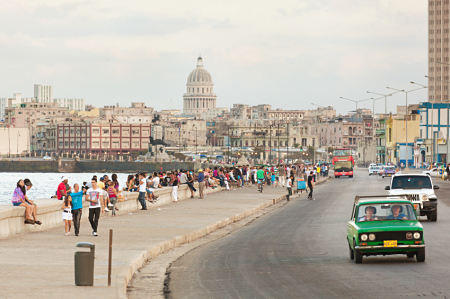 Virginia Governor Terry McAuliffe recently announced that the Virginia Port Authority has signed a Memorandum of Understanding (MOU) with the Cuban National Port Authority to evaluate commercial opportunities between the Port of Virginia and Cuba’s newly opened Port of Mariel Special Development Project.

The MOU establishes a platform for cooperation and information sharing aimed at developing links between Cuba and Virginia to support waterborne trade and investment, improve customer service, enhance collaboration to achieve improved business practices, and increase the level of vessel services available between the two entities. Under this agreement, the two port authorities may undertake initiatives including data interchange, market studies, training and technological interchange.

“This agreement will enhance Virginia’s trading relationship with Cuba and supports our efforts to build the new Virginia economy,” said Governor McAuliffe. “Virginia enjoys a uniquely productive economic relationship with Cuba, and this MOU will generate additional opportunities for economic and cultural exchange. As relations between our nations continue to normalize, this agreement will position Virginia as a leader in trade relations with Cuba now and in the future.”

Cuba’s $1 billion port project will make Mariel the largest port in the Caribbean, with a capacity to handle approximately 1.3 million shipping containers a year. It will also allow Mariel to serve as a trans-shipment hub for the region.

“I believe Virginia’s continued engagement has once again yielded positive results in Cuba,” commented Secretary of Agriculture and Forestry Todd Haymore. “Last year, Cuba purchased $25 million in agricultural exports from Virginia, all in bulk shipments. This agreement will help position Virginia to provide container service for agricultural products such as poultry, pork and apples, which are shipped in refrigerated containers”

“Despite Virginia’s export success to Cuba, there is currently no direct container service between Virginia and Cuba,” said Tom Capozzi, Chief Sales Officer of Virginia International Terminals, who served as a representative for the Virginia Port Authority during the visit. “Our agribusiness companies that ship products in containers could benefit from enhanced cooperation between our port terminals and the Port of Mariel, especially as Mariel becomes an important trans-ship service provider for the region.”

“The Port of Virginia is the Commonwealth’s gateway to the world. This new agreement benefits the agriculture industry and opens Virginia’s and the nation’s doors to new markets as relations with Cuba continue to strengthen,” said Secretary of Transportation Aubrey Layne. “These opportunities demonstrate the wisdom of investing in our port in order to build a new Virginia economy and strengthen our competitive edge in the global economy.”

While the trade mission to Havana yielded a series of positive results, Governor McAuliffe noted that the full potential of opportunities with Cuba will never be realized until the U.S. embargo against Cuba is ended. In October 2015, Governor McAuliffe was joined by eight other governors in a bi-partisan letter to the leaders of Congress calling for an end to the remaining trade and travel restrictions. Governor McAuliffe reiterated that his administration will continue to press for changes to federal law that will allow for free and open bilateral trade and travel between the U.S. and Cuba.