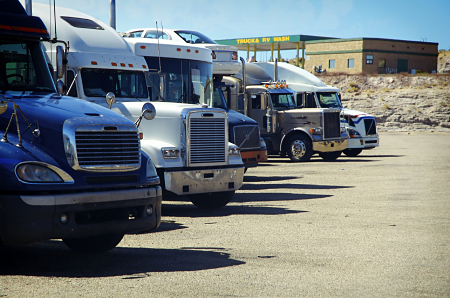 Truck drivers are tired—literally—of searching for parking spots. In a survey of 4,000 truck drivers conducted by an Illinois consulting firm, 95 percent said they spend more than 15 minutes to find parking for mandatory rest periods. Nearly 40 percent search for longer than an hour.

However, transportation leaders say a recent $4 million grant is putting Indiana on the “straight and narrow” toward a high-tech solution, according to an article on the insideindianabusiness.com website.

Eight states are sharing a $25 million grant to implement the Truck Parking Information and Management System to help drivers find open parking spaces when they need them. Federal regulations prohibit truck drivers from surpassing 11 hours of driving per day, but many struggle to find a safe place to rest.

“A lot of times, when a driver can’t find a place to park, they end up parking on the ramps leading into a rest area or on other interchanges,” says Indiana Department of Transportation (INDOT) spokesman Will Wingfield.

In Indiana, the new electronic system will operate along I-65 and I-70. Automated sensors will monitor 15 truck parking sites to track where open spaces exist in real-time. The sensors will be calibrated according to how spaces exist in each lot, then count the number of trucks that enter to park and exit. The number of open spaces will be automatically calculated and displayed on signs along the interstate.

“What you’ll see on the highway is a sign similar to the electronic signs that show how much time it’s going to take to get to the airport, for example, or a certain interstate,” says INDOT Freight Policy Analyst Donna Luley. “Those will show how many parking spaces are available in real-time.”

In addition to Indiana, seven other states will be installing the same system: Kansas, Kentucky, Iowa, Michigan, Minnesota, Ohio and Wisconsin. The ultimate goal is to create a seamless network for drivers making long-haul trips.

Headquartered near Detroit, Michigan, James Burg Trucking Company began using the program in its home state nearly two years ago during a pilot project. President James Burg says it’s “awesome” that the network is now being extended; 95 percent of the company’s miles are in Michigan, Ohio and Indiana. While safety is the top priority, Burg believes the new system will also improve the bottom line.

“A big issue is wasted time; driving around equates to loss of revenues,” says Burg. “If a truck gets off the interstate thinking there’s parking at a fuel stop, drives around and can’t find it, gets back on the freeway and goes down the road to another spot, that’s costing 15 minutes to half an hour and miles of driving around.”

Burg believes signs that broadcast where open spaces are will bring “great value” to his drivers, but he’s hopeful the information will be used to increase capacity—wisely.

“My longer view is that this information will be used to collect data, so stakeholders can be aware of where the true shortages are in truck parking and be able to expand the network,” says Burg. “The first step is to know where the problem is, then it can be fixed by adding capacity where it’s needed.”

The system is expected to be up and running in 2018, and INDOT believes public-private partnerships with truck stops could be the best route for adding more parking spaces to the monitoring system.

“We believe private locations would be very interested in this as well, because it will be directing business to them,” says Luley.

Transportation leaders say focusing on where trucks come to a stop, ironically, will help keep the Midwest trucking industry in motion.