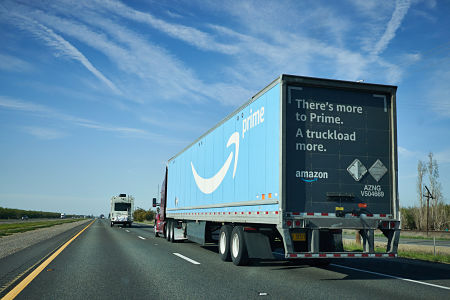 Trucking executives say they still expect growing business from Amazon.com Inc., even as the company takes steps to move some of its own freight, according to an article in the Wall Street Journal.

The Seattle retailer said in December it would roll out thousands of branded semi-trucks, one of several recent moves by the company to take more control of its shipping routes. The announcement sent shudders through the trucking industry, which ships millions of packages a day between Amazon distribution centers and the warehouses belonging to home-delivery carriers such as FedEx Corp. and United Parcel Service Inc.

Two of the largest U.S. trucking companies brushed off the potential threat from the e-commerce giant saying there was plenty of freight to go around.

“Amazon’s trailer purchases are having little to no impact on our truckload segment,” said Swift Transportation Co., a large truckload carrier. “We currently operate several different facilities for Amazon across a variety of our suite of services and are excited about our potential growth with this partnership.”

Executives at Covenant Transportation Group, which works closely with Amazon because it specializes in expedited shipments hauled by driver teams that can stay on the road around the clock, said they also believe demand from Amazon will continue to grow.

“They’re growing so dramatically that it’s hard for anybody to keep up with what they are doing in the marketplace,” said Joey Hogan, Covenant’s chief operating officer. “They need every truck they can get their hands on.”

Amazon and others want to reserve trucks on the fly, as the location of their customers in relation to the goods they purchase can be unpredictable.

“People are calling at 3 a.m., at 5 a.m., saying they need 5 trucks, 10 trucks or 12 trucks. It’s a moving target,” Parker said. For the peak holiday season, the company has shifted to charging retailers by the day instead of by the mile because of the unpredictability. “The model is, ‘I need trucks. I don’t know where they’re going, I don’t know when the load’s going to be ready, but I need trucks.’”

Covenant saw a 10.8% increase in freight revenue the fourth quarter from a year earlier, and freight revenue per tractor increased 2.9% to $4,423 per week in the fourth quarter from a year earlier. But the gains were off-set by rising driver pay, an unusually high depreciation expense due to an unfavorable used tractor market, and negative fuel hedge positions, the company said in its earnings report.

Covenant locks in prices for about 25% of its fuel two years ahead of time, which translated to losses last year as fuel prices dropped to historic lows and the company’s revenue from fuel surcharges decreased. The carrier recorded $4.5 million in losses from fuel hedging transactions in the fourth quarter, but said it expects opportunities to lock in lower prices for 2017 and 2018, and will continue its hedging strategy.