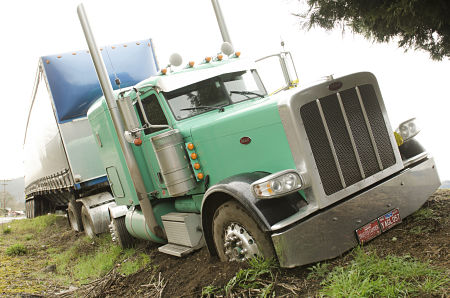 North Carolina boasts some of the lowest vehicle insurance rates in the country, but policies are available only to residents and businesses in the state.

A decade ago, drivers from New York and New Jersey were registering their cars in North Carolina so they could get cheaper car insurance, but the General Assembly changed the law to stop it.

Goodwin says the same thing is happening in the $670 million-a-year commercial vehicle insurance market, and he wants the law changed again.

“They have accidents in other states and the like. It impacts insurance rates for the legitimate businesses that are here, and it’s becoming a growing problem,” he said. “It’s wrong, and we need to tackle it.”

According the Secretary of State’s Office, Fast Transport Inc. is a North Carolina registered corporation, but the address listed is in a remote residential neighborhood in Wake Forest. There’s no sign for Fast Transport nor trucks at the address, and no one was home when WRAL Investigates knocked on the door.

A Fast Transport spokesman said on the phone that the Wake Forest house is the trucker’s accounting headquarters. According to this insurance quote, the company claims dozens of trucks in Florida, Georgia and Texas but only one in North Carolina.

Goodwin won’t comment on specific cases, but he said only North Carolina companies should be able to take advantage of the state’s lower insurance rates.

“We want to protect and help the legitimate companies that are doing business here from being taken advantage of by businesses that are basically lying, that are misleading the state and misleading insurance companies as to their presence in this state,” he said.

Goodwin said his office is drafting legislation to present to the General Assembly when lawmakers reconvene in April that would better differentiate between legitimate North Carolina companies and posers exploiting the law to get cheaper rates.