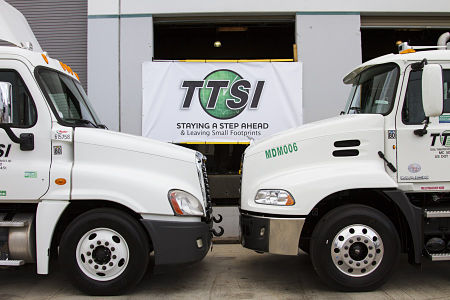 LOS ANGELES—One of Southern California’s largest port trucking companies has filed for bankruptcy after losing several legal battles with independent-contractor drivers who claimed they should be treated as full-time employees, according to a report in the Wall Street Journal.

Premium Transportation Services Inc., which is known locally as Total Transportation Services Inc., or TTSI, filed for chapter 11 bankruptcy protection in federal court in Delaware. The company said in a court filing that “downward pricing pressure from some of its major clients over the past year” along with mounting costs of litigation with independent drivers had proven more than it could manage.

TTSI has lost nearly a dozen misclassification claims before the California Labor Commission and 14 lawsuits in state court, which together amounted to roughly $3.5 million in awards and damages. Legal fees for those cases, along with several other lawsuits currently proceeding before the commission and the courts, have cost the trucking company an additional $4 million, according to the bankruptcy filing.

Like the majority of trucking companies that haul goods to and from the ports of Los Angeles and Long Beach, performing the service known as drayage, TTSI works primarily with independent truckers who own or lease their own vehicles. Approximately 140 such drivers contract with TTSI, according to court documents.

But that model has increasingly come under attack in recent years, particularly at the Southern California ports, which are served by more than 10,000 local drayage drivers. Backed by the International Brotherhood of Teamsters, drivers working with several local companies have filed wage claims, arguing that they were misclassified as independent contractors and that they’re owed overtime pay and other benefits.

In light of those issues, TTSI parent company Saybrook has been experimenting with a full-time employee model at TTSI’s sister company Eco Flow Transportation, one of the port area’s few all-employee trucking firms, which opened last year. In the past 10 months, TTSI has been brokering some trucking work to Eco Flow for a fee.

In Monday’s filing, TTSI said it isn’t alone in the legal challenges it faces with independent operators. “Other drayage carriers have faced similar claims and several have ceased doing business as a result of such claims and issues,” Chief Financial Officer Sam Joumblat said in a statement.