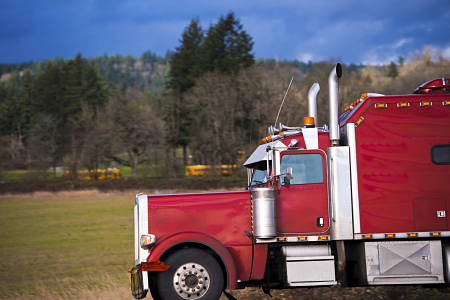 Three of the largest U.S. trucking companies reported a drop in profits as demand for freight-hauling services slumped, according to a report in the Wall Street Journal.

Trucking companies say too many big rigs are plying the market, driving down the rates they can charge customers. Demand has also taken a hit from persistently high inventories at major retailers, which reduces the need for shippers to restock stores and warehouses. Rising driver wages are also squeezing profits, they said.

“Customers are aggressively working to take advantage of the favorable shorter term trends to the detriment of carriers,” Werner said.

Dave Jackson, Knight’s chief executive, said spot-market trucking prices are declining this year even compared with rates last year that were down as much as 20%. “So if you start to look at it over a two-year period, it’s an unbelievable decline in pricing,” Jackson said.

Jackson said he expects capacity to tighten and earnings to improve this year as truckers slow the growth of their fleets and manufacturing picks up. Companies ordered 37% fewer trucks in March compared with a year earlier, according to ACT Research.

Swift blamed a “soft freight environment,” including fewer total loaded miles driven and weak pricing, especially in the refrigerated cargo segment. The company said it plans to further delay equipment purchases and get rid of some of its tractors over the next quarter to reduce truck count by 200.

Werner, Knight and Swift are among the largest companies in the truckload market, where truckers carry full truckloads of goods for retailers and manufacturers, typically to distribution centers and factories.

Raymond James analyst Art Hatfield downgraded Knight’s shares after the announcement, in which Knight also lowered its second-quarter earnings guidance. The company said it is seeing contract freight rate increases from flat to 2% this bidding season, rather than the 2% to 3% it had expected at the beginning of the year.

Cowen and Co. lowered its earnings estimates for Werner, writing in a research note that the company “had been just about the only major truckload carrier with 2016 fleet growth plans, but such plans are no longer set in stone.”

The weak freight market is forcing large trucking companies to find more business in the spot market, where prices are more volatile, as opposed to signing long-term contracts with customers, analysts say.

The first quarter “is typically the weakest freight quarter of the year with improvement in Q2,” said Casey Deak with Wells Fargo. “With that in mind, it is not all that surprising that carriers were forced into the weak spot market maybe more than they would have liked. If the core customer base strengthens, we believe that quarterly results could see improvement as early as Q2.”

Separately, Landstar System Inc., a company that arranges freight services, including trucking loads, for shippers, reported a 3% decline in first-quarter net income to $29.2 million on $711.6 million in revenue.