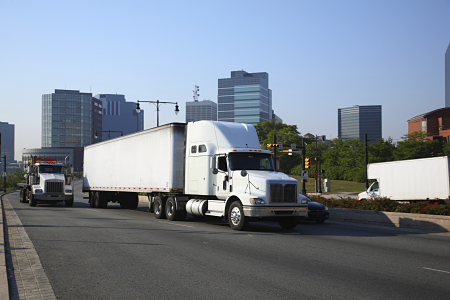 The trucking industry has won a round in an ongoing bout with labor unions over whether truck drivers at the East Coast’s busiest port are employees or independent contractors, according to an article in the Wall Street Journal.

The New Jersey Assembly had been considering legislation that would have forced port trucking companies to use mainly employee drivers, and raised penalties for improperly hiring contractors. However, the Assembly’s transportation committee last month merged that bill with an industry-friendly measure that would keep the penalties but broaden the definition of independent drivers to include most port truckers.

The International Brotherhood of Teamsters, which backed the original bill, has withdrawn its support. A vote before the full Assembly hasn’t been scheduled.

The Teamsters are leading efforts to organize drivers who haul loads from the docks to nearby rail yards and warehouses at the nation’s ports, including the 7,000 truckers operating at the busy terminals around New York Harbor. Employee classification has emerged as a key front, as most port drivers operate as independent contractors, who cannot be unionized.

In Los Angeles and Long Beach, the country’s two biggest ports, hundreds of drivers have sued claiming they were improperly hired as contractors. Some trucking companies have filed for bankruptcy protection or left California, citing the costs of settling driver lawsuits or the greater expense of hiring employee drivers. FedEx Corp. and Uber Technologies Inc. have settled with drivers as a group to end similar disputes.

“New Jersey’s been a long-running issue. It’s the country’s third largest port, and that’s their last big bastion of truckers who are not unionized,” said Curtis Whalen, executive director of the Intermodal Conference of the American Trucking Associations.

Unions have failed to make headway on the issue in New Jersey, where the bulk of the region’s port trucking takes place but labor laws favor the industry. In 2013, Gov. Chris Christie vetoed a measure that would have stiffened penalties for misclassifying drivers.

“The key to this whole equation is enforcement,” said Fred Potter, head of the Teamsters’ port division. “Who is going to force companies to enforce labor practices? There isn’t really proper enforcement being done the NJ Dept. of Labor.”

“What we want to do is set up specific rules as to a guy who owns his own vehicle, licenses the truck, and washes the truck. He’s an independent contractor,” said Tom Adamski, who runs a port truck depot in New Jersey and is a member of the intermodal council of the New Jersey Motor Truck Association, which lobbied against the Teamster-backed bill.

Sarah Leberstein, a senior staff attorney with the National Employment Law Project, a labor advocacy group, said the industry-supported definition is “not just a loophole, it’s an enormous cavern for employers to walk through.”

The union-backed bill endorsed a standard that would classify more drivers as employees, and called for stricter enforcement of wage and benefit violations. For example, drivers who own their trucks would still be employees – and able to unionize – if they drove for companies that specified what time shipments needed to be picked up.