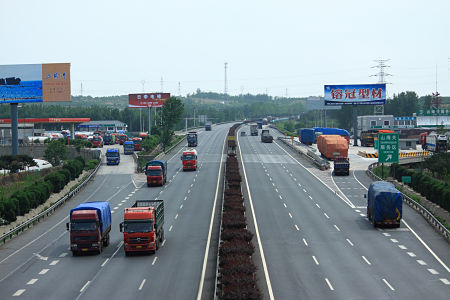 China is gearing up to overhaul its road delivery with fleets of self-driving long-haul trucks, according to a piece in technologyreview.com.

A number of companies are developing automation technologies that promise to lower costs, reduce accidents, and improve overall efficiency for the trucking industry by allowing drivers to make longer trips that include periods of rest.

In Europe and the U.S., Volvo, Daimler, Uber, and others are testing trucks capable of driving themselves under expert supervision. But several Chinese-based companies are working on automated trucks, and lenient regulations as well as a desire to overhaul the country’s chaotic trucking industry may smooth the way for the technology’s introduction. This could provide a handy edge in the race to develop a lucrative new way of hauling goods.

Intercity freight transportation will be a huge market in China, says Xiaodi Hou, CTO of TuSimple, a company based in San Diego and Beijing that’s developing an automated trucking platform in partnership with a large Chinese truck maker. He says there is effectively no restriction on testing self-driving systems in China currently, and he believes the government will be supportive because it wants to see the trucking industry improve.

TuSimple is collecting data aboard a number of manually driven trucks. The company aims to demonstrate the technology in the first quarter of next year, and to have a commercial demonstration in 2018.

The approach TuSimple is focused on is particularly cost-effective. It relies heavily on computer vision and algorithms that can understand a scene in detail, going beyond identifying vehicles to predicting what actions they may take. “Everything is done in computer vision with deep learning,” Hou says, referring to a popular kind of machine learning that involves feeding large amounts of training data into a big neural network.

Hou, who completed a PhD in computation and neural systems at Caltech under Christof Koch, a renowned neuroscientist now at the Allen Institute for Brain Science, has been working on advanced computer vision for many years.

Across China, around 7.2 million trucks and 16 million drivers are responsible for intercity transportation of goods, according to figures provided by TuSimple. This industry is worth more than $300 billion, and drivers account for around 40 percent of the costs incurred by truck companies. Some long-distance trips across China require two or even three drivers to complete. Autonomy would allow a single driver to sleep during long highway stretches.

TuSimple isn’t alone in sensing a big opportunity in China. Baidu, the country’s dominant Internet search company, is investing heavily in automated driving and other areas of artificial intelligence. The company is collaborating with the Beijing-based truck maker Foton, which showed off a prototype self-driving truck at an expo held at the Shanghai New International Expo Center this week. Baidu has several different teams working on automated driving systems, including a team dedicated to bringing full autonomy to cars. It plans to demonstrate the latest version of its technology this week.

The truck freight industry in the U.S. is even bigger, valued at around $700 billion. Uber, which is also developing automated taxis in Pittsburgh, has moved quickly to create self-driving trucks after acquiring a startup called Otto in August this year.

Ng Yi Pin, an investor with Yunqi Partners, an early-stage VC firm in China, says the commercial opportunity is impressive. He agrees that the central government will support the effort, although he says local governments will have to deal with some of the resulting unemployment among existing drivers. “The economics from labor and fuel-efficient savings are significant,” Ng says, “so market forces will make it happen.”

The regulations regarding self-driving vehicles are only just emerging, as governments try to balance safety and public concern with a desire to foster innovation and successful new auto ventures. China’s auto regulator said in July that it was drafting rules regarding automated vehicles, and asked that companies limit their testing until they are released. However, Hou, Ng, and others believe the government will ultimately be relaxed about testing and commercialization of self-driving trucks.

Meanwhile, in the U.S., government regulators issued a set of guidelines this September that signaled a hands-off attitude towards self-driving vehicles. At the same time, the National Highway Traffic Safety Administration (NHTSA), which is responsible for safety recalls, has signaled an intent to crack down on automated systems that it deems unsafe or too experimental.