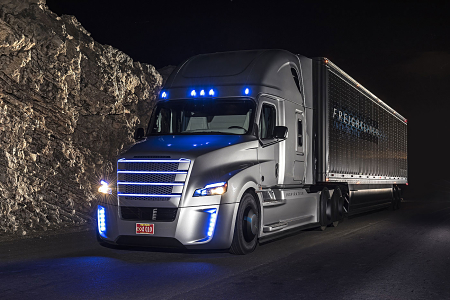 For decades, trucking has provided big-rig driver Frank Mora and his family a decent living. He doesn’t expect that will last forever, according to a feature piece in the San Jose Mercury-News.

Test models of cars that will shoosh passengers around town without a human at the wheel have attracted much media attention. But it’s apparent that when driverless vehicles hit the road for real, they’ll be driven by commerce, and that means trucks will likely lead the pack.

Mora, whose family has been in the trucking business for three decades, said he can easily understand the appeal of a machine that can be run 24 hours a day, without forced breaks for rest and with less labor. The technology is already out there.

From completely driverless big rigs to platooned trucks that could be manned by a single driver and eventually automated, the testing is underway.

“Sure, as an owner I could save a lot of money on wages,” he said. “As to whether I think it’s safer, it’s too soon to tell. I am sure that there are … maneuvers that only humans can do.”

Success for the technology could summon a seismic shift for California’s 218,000 truck and delivery drivers – 2.5 million across the nation – according to the latest count from the Bureau of Labor Statistics.

“This is not the far future,” said Xiao Yun Lu, a research engineer at Partners for Advanced Transportation Technology (PATH) at UC Berkeley. “This is the near future.”

The economy churns on the goods truckers carry to markets, retail stores and, increasingly, directly to consumers. Many believe automation can make the business safer, cut operator costs and address intermittent shortages of truck drivers.

“There is a very strong commercial motivation,” said Steven Shladover, a research engineer and manager at PATH. “(Trucks) are out there on the road all day and every day, unlike passenger vehicles which are parked 95 percent of the time. When people buy trucks, they are looking for a return on the investment.”

“There is nothing we can do to stop it or change it,” said 28-year-old driver Mora, who spent much of his childhood inside the cab of an 18-wheeler. “But with change, there is always opportunity.”