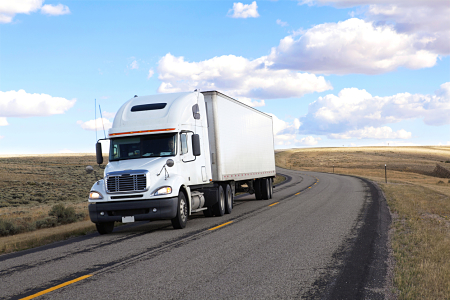 The team has identified a solution using big data technology. The challenge is finding the most effective way to share data collected by state traffic centers across the country with carriers and drivers. Dave Cantor, an associate professor of supply chain management at Iowa State, is part of the research team working with the Iowa Department of Transportation on this project. Cantor says Iowa is leading the way to improve freight transportation moving through the state.

“The DOT has a lot of real-time data on the operating conditions of state highways and secondary roads, and it wants to make sure the data is of value to carriers,” Cantor said. “With this data and information, we can improve on-time delivery performance, safe delivery of the freight and minimize idle time.”

Researchers surveyed around two dozen logistics and technology providers, large and small motor carriers, as well as various types of haulers, including van, temperature controlled, flatbed and intermodal. Carriers consistently said they would benefit from real-time data related to road conditions, speed of traffic, points of congestion, accidents and construction projects – situations that could impede the flow of commerce.

In their report to the DOT, researchers explained that the industry is increasingly driven by technology. However, several carriers expressed concern about an uneven playing field. Of the more than 500,000 carriers in the industry, the majority are small operators with fewer than 100 trucks. Many of the smaller carriers do not have the technology or work force needed to receive and process data from the DOT, researchers said. They recommend working with a third-party vendor to create a central location that streamlines the collection and dissemination of DOT data.

While it is possible to receive data from DOT traffic operations centers through smartphone apps or text messages, researchers say that is a less desirable option. The goal is to improve driver safety, not create another distraction. Neal “Skip” Foster, a former trucking company owner who is part of the research team, says a government mandate may help make the data more accessible. By the end of the year, all carriers must comply with an electronic logging device (ELD) mandate to record driving times. Foster says the industry should work to integrate navigation data into the ELD system.

Drivers can spend only 11 hours on the road in a 24-hour period. Foster says previous studies have found drivers spend only 7.5 to 8 hours driving; the rest is spent sitting at a dock or in traffic. Providing information related to traffic congestion through the ELD could significantly improve productivity, he said.

“There’s no sense in sending a truck into Des Moines at 4 o’clock in the afternoon if we know the driver is just going to sit in traffic,” Foster said. “Every truck line that I know wants to reduce accidents and increase safety, and congestion does nothing but enhance accidents. The industry wants to stay away from congestion and slowdowns to improve safety.”

Researchers say efforts to reduce slowdowns also benefit drivers, many of whom are paid on a per-mile basis. Drivers are not making money when they spend hours stuck in traffic, which makes it difficult for the industry to recruit and retain good drivers. Cantor says the technology would help ease driver frustration and increase their earning power.

Many trucking companies would also like to access information on parking availability. Finding a safe place to park along a given route can be challenging for drivers. Neal Hawkins, associate director for the Institute for Transportation (InTrans) at Iowa State, says they are working with the DOT to provide this information through an app or some form of technology, rather than using electronic highway signs.

While the data exists, researchers found many inconsistencies as to what individual traffic operation centers collect in each state. To be truly effective and beneficial to the industry, Hawkins says it needs to be a bigger movement.

“State DOTs have a lot of information that can benefit the industry,” Hawkins said. “However, there is a limitation to this effort when you have just one DOT involved, because so many trucks travel across state borders. It really begs for a bigger coordinated effort.”

In addition to parking information, researchers say drivers could also get updates on the latest weather conditions. The technology could also be useful for autonomous vehicles, said Cantor.

In their report, researchers made the following recommendations for the Iowa DOT to move forward with the development of a real-time traffic operations solution: