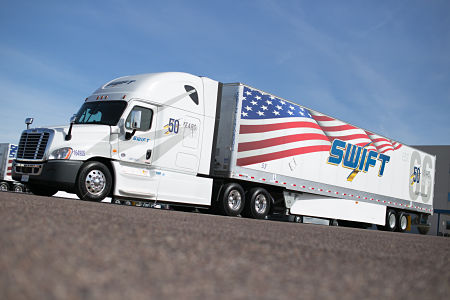 Two of the largest trucking companies in the U.S are merging in a rare consolidation in the fragmented truckload services market. Swift Transportation Co. and Knight Transportation Inc. are announcing a stock swap today that will create a single business called Knight-Swift Transportation Holdings Inc. and overhaul the leadership of the operations, according to a report in the Wall Street Journal.

Swift shareholders, through a series of steps, will own 54 percent of the new company, with Knight holders owning the rest. The operations will run separately as Swift and Knight, but deeper changes are likely at Swift, the country’s biggest truckload carrier. Members of Knight’s board and leadership take a bigger role on the new board and in operations, bringing the discipline that has produced stronger shareholder returns than Swift has counted. Several top Swift executives will depart, including CEO Richard Stocking. Swift founder Jerry Moyes will remain on the board, but Mr. Moyes will hold a diminished minority stake. Knight’s leaders, meantime, will get a bigger footprint in the truckload market and a bigger stake in a hoped-for rebound in shipping demand.

It’s a competitive response on two tracks: Retailers, from hyper-local companies to mid-sized sellers, are trying to get goods to consumers faster to keep them from flocking to Amazon Prime, while shipping companies fear the e-tailer will starve their own networks by drawing more goods to its burgeoning logistics network. The demand has led to new companies like Radial, which grew out of eBay Inc.’s e-commerce solutions unit, ShipBob and Red Stag Fulfillment. The companies pool orders from many customers to give smaller retailers the benefits of scale. The fulfillment operators are trying to lower shipping costs, but the real goal for the retailers is to stay in business.

Operating those sprawling e-commerce fulfillment networks is getting more expensive. Wages for workers in warehouses – including the distribution centers run by Amazon, FedEx Corp. and others that handle online orders – are rising at their fastest pace in over a decade, the WSJ Logistics Report’s Jennifer Smith writes. The pay hikes come as the warehouse boom runs headlong into a tightening labor market. Warehouse work can be grueling, and logistics companies are finding they can no longer attract a deep a pool of applicants with pay that is often just above minimum wage. In addition to offering higher hourly wages, operators are attracting labor through performance incentives and poaching nearby rivals, tactics that will only become more common as the national unemployment rate hovers near a nine-year low.