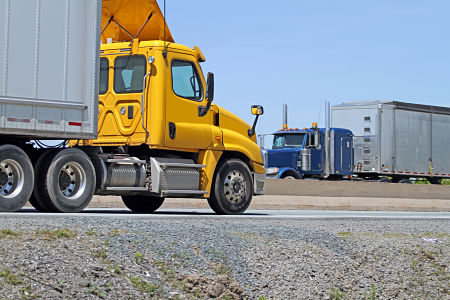 American trucking is in the midst of a strong growth trend, according to an article in logisticsmgmt.com.

The rosy forecast comes from the American Trucking Associations (ATA) Trends 2017, which ATA describes as the annual compendium about the trucking industry.

“The information in Trends highlights exactly what I tell elected officials, regulators and key decision-makers every day: trucking is literally the driving force behind our great economy,” said ATA President and CEO Chris Spear. “Safe, reliable and efficient motor carriers enable businesses throughout the supply chain to maintain lean inventories, thereby saving the economy billions of dollars each year.”

The compendium outlines the sheer magnitude of the trucking sector, starting with trucking industry revenues for 2016, which ATA said came in at $676.2 billion, which equates into 79.8%, or basically four-fifths of total U.S. freight spend.

Other key trucking-related metrics in this year’s edition include:

This year’s edition of American Trucking Trends was issued on the heels of the ATA Freight Transportation Forecast 2017, which was comprised of data from the ATA and IHS Global Insight.

Like the Trends report, numbers and figures issued in this publication painted a largely positive picture for freight transportation over all, including how freight volumes are projected to grow 2.8% in 2017, with 3.4% annual growth through 2023, followed by a 2.3% annual rate in subsequent years. What’s more, the report is calling for 15.18 billion tons of freight to be moved by all modes in 2017, with the expectation that it will head up to 20.73 billion tons, an increase of 36.6% in 2028.

The 2.8% growth will be paced “by solid growth across all modes resulting from general economic growth as well as improved conditions in the manufacturing sector,” the report stated.

This report made it clear that over the forecast period, capacity shortfalls will develop, with some selected tightness in freight handling capacity starting to emerge, suggesting that capacity expansion will be required if the modes are going to be able to handle anticipated growth.

ATA Chief Economist Bob Costello said that this report takes a bottom up approach, first with a general economic forecast that is then fed through a transportation model.

“It is not just looking at the modes and saying ‘this is by how much we think the modes will grow,’ especially when it comes to a modal shift,” he said.
“There is no assumption that one mode will grow over another mode, because [of some specific factor like tightening truck or rail capacity]. There is none of that. It is assumed that all the modes will haul all the freight they are asked to….that is a big assumption, but it is a proper one as it is based on economic growth.”

And with that sentiment comes the ongoing, and ostensibly always correct thesis that economic growth drives freight transportation growth. Given the often slow pace of the lengthy economic recovery that tends to be overlooked at times even though it remains as true as ever.