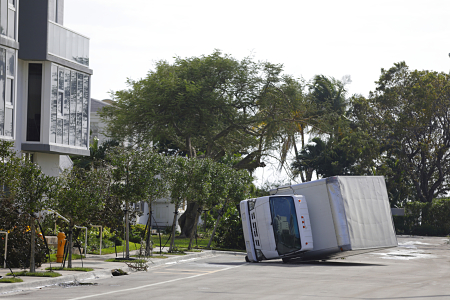 The damage to Puerto Rico in the wake of Hurricane Maria has been described, in a word, as “apocalyptic.” CNN outlined the extensive beating the island took, highlighting the devastation caused to communications, hospitals and the like. While relief, in the form of aid and supplies, has been dispatched to Puerto Rico, only a portion has been able to make it to its intended recipients. The challenge? Hurricane Maria dealt a crippling blow to Puerto Rico’s already ailing infrastructure–the main distribution channel for goods across the island.

A System on the Brink

As noted by Gist, Puerto Rico is a poor territory, even more so than any U.S. state. The island is stifled by debt, and, according to The Hill, “a catastrophe of corruption, mismanagement, incompetence and ignorance.” That article goes on to say the lack of funds contributed significantly to Puerto Rico’s current predicament. No money meant no conceivable way to invest in rebuilding worn-down roads. Infrastructure on the island had been falling apart for years, and while there were those who warned that just a single disaster would be enough to snowball into a catastrophic scenario, their cries fell on deaf ears. Even without the damage caused by Hurricane Maria, the island’s roads were on borrowed time:

Puerto Rico’s state made it more vulnerable to the effects of disaster. After Maria hit the island, a situation that was already on the brink of collapse was made much worse by devastating winds and torrential rains.

In the Wake of Maria

As touched on above, post-hurricane, Puerto Rico’s infrastructure now finds itself in an even more precarious position. In an interview with the Wall Street Journal, Jose Ayala, the vice-president of Puerto Rico Services at Crowley Maritime, described the force with which Maria rocked the island as more ruinous than that of the previous storms that battered Puerto Rico–Hugo in 1989 and George in 1998–combined.

He added that the destruction of the roads has been one of the largest impediments to relief efforts, with land routes so badly damaged that access to areas beyond the capital city of San Juan is nigh-impossible. FEMA’s detailed map of the region, designed to show which areas are currently accessible, bears this out. Many of the island’s roads, as of the map’s most recent September 26th update, are blocked by mudslides, floods, debris and other types of structural damage. The potential collapse of the Guajataca Dam could make the situation even more dire for roads in the immediate vicinity of the river.

Compounding this infrastructure challenge is the fact that access to gasoline, trucks and, most importantly, drivers, has been severely limited. An estimated 20 percent of the island’s trucking workforce is able to get to work, with the rest hampered by the after-effects of the storm (most notably, a lack of fuel and the inability to communicate). For those truckers who are able to drive, further impediments in the form of “bureaucratic wrinkles” have made their jobs even more difficult to perform.

Though workers on the ground are doing their best to mend the wounds caused by Hurricane Maria, and federal agencies like the U.S. Department of Transportation have made clear they are committed to taking a toll of the damages and repairing what they can, it may be some time before Puerto Rico, particularly its infrastructure, is made whole again.