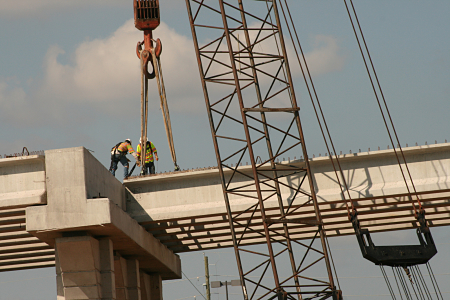 American Trucking Associations President and CEO Chris Spear told a Senate panel in December that the federal government needs to invest more in highway infrastructure if the trucking industry can hope to keep up with the growing demand for freight transportation services.

“The Highway Trust Fund is projected to run short of the revenue necessary to maintain current spending levels by 2021, creating a huge funding gap that could force states to cancel or delay critical projects. The U.S. spends less than half of what is necessary to address these needs,” Spear said. “As the investment gap continues to grow, so too will the number of deficient bridges, roads, bottlenecks and, most critically, fatalities attributable to inadequate roadways.

“ATA’s proposed solution is the Build America Fund. The Fund would be supported with a new, indexed, 20-cent per gallon fee built into the price of transportation fuels collected at the terminal rack, which will generate nearly $340 billion over the first 10 years,” he said. “This proposal will stabilize the trust fund for many years and provide the resources necessary to reduce the project backlog.”

Spear also urged the Senate to focus infrastructure improvement efforts on freight movements – across modes – to maintain the smooth flow of commerce in the country and to support a “strong federal role in funding and overseeing highway improvements.”

The Trump administration has cited infrastructure funding as a priority for 2018 but there have been mixed signals coming out the Washington.

White House advisors have been previewing a plan that calls for $200 billion in federal monies as “seed money” for private sector investments that would fund a $1 trillion infrastructure investment program over 10 years.

In September, the President started sending out signals that private investment would not be the focus of the infrastructure plan but would rather shift more responsibility to states and cities.

In December, DJ Gribbin, an infrastructure policy advisor to President Trump, described the new plan as an “incentive program.”

“Part of what we want to do… is say, ‘Listen, if you as a state or local elected official are willing to create a new revenue stream for infrastructure, we as the federal government want to partner with you in doing that,’” Gribbin said.

The new infrastructure plan is expected to be unveiled this month.

Brookings Institution fellow Adie Tomer, who has reviewed a draft of the plan, says it emphasizes transportation projects, and that it basically resembles a discretionary grant program like New Starts and TIGER, two DOT programs popular across bipartisan lines for helping projects led by states and local transportation authorities meet their funding needs.

The plan appears to place more onus on cities and states to raise additional funds, whether it be through gas and sales taxes, tolls, congestion pricing or other forms of user’s fees.

Tomer said states and cities will have to provide additional funding. “The more you come up with new revenue, the more likely you are to get help from the feds. This is going to be the key to the details,” he said.

Democrats figure to fight the infrastructure plan because it will require an additional debt burden coming on the heels of the tax cut and jobs legislation that is expected to add $1.5 trillion to the debt over the next 10 years.

Democrats have slammed the idea of public-private partnerships, calling them corporate giveaways and predicting they will only result in more toll roads. They worry the incentive approach will shift funding responsibilities away from the federal government to local governments.

Concerns have also been raised regarding a streamlined construction permitting process that could lead to an erosion of environmental protections.

Democrats instead prefer to inject federal funding directly into the nation’s transportation system and have laid out their own competing $1 trillion infrastructure package.

In addition to Democrats, the administration will also have to deal with fiscal conservatives within the GOP, who have been wary of massive federal spending on infrastructure because of the deficit.

The White House is reportedly considering a hike in the federal gas tax, which has not been raised in 20 years.

Some GOP members are reluctant to go down that road.

“The administration is looking at a fuel tax,” said Rep. Sam Graves, (R-Mo.), chairman of the House Transportation and Infrastructure Subcommittee on Highways and Transit. “But I’d like to pivot toward vehicles miles traveled, at least in the commercial sector.”

“To be quite honest, it’s going to be quite hard to move a gas tax increase in the House,” Graves added.