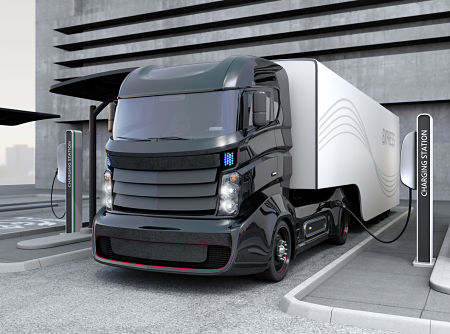 Growing up in a family business with a fleet of heavy-duty trucks, Dakota Semler saw the business face a difficult choice. New state air quality standards in 2007 meant that the winery would either need to install pricey retrofit kits in each truck or replace the whole fleet. As the economy crashed the following year, they made the decision to shut the fleet down.

“At the time, we figured that somebody would eventually build electric trucks, therefore foregoing the requirements for compliance,” Semler says. By 2016, at the age of 24, he decided that he should bring together a team that could do it themselves. Semler and co-founder Giordano Sordoni, also 24, realized that battery technology, electric motors, and software had advanced to the point where electric trucks could be cost-competitive, according to an article on fastcompany.com.

In 2017, their startup Thor Trucks – with an engineering team pulled from L.A.’s growing electric vehicle industry–unveiled their design for the ET One, an electric semi that can haul 80,000 pounds of cargo and travel 300 miles on a single charge. It’s the winner of the transportation category of Fast Company’s 2018 World Changing Ideas Awards.

While many people might picture semis making cross-country trips, “the reality is that the majority of the Class 8, heavy duty truck market is more local and regional,” Semler says. For truck drivers delivering local freight, or grocery distribution, or for garbage trucks or cement trucks, a vehicle with a short range isn’t an issue. The ET-One can recharge after a workday in 90 minutes.

Unlike Tesla, which is also building an electric semi, Thor Trucks plans to use many off-the-shelf components, and partner with other companies for those parts, along with manufacturing, distribution, and maintenance. “The typical Silicon Valley software approach is to come into a new space and say ‘hey, everyone in this space is stupid and no one’s thought of this clever way of doing things that we thought of, so that’s why we’re going to dominate,’” says Sordoni. “But the reality is that the automotive industry has developed and improved the way it has over the last 100 years for a reason, and hardware is a lot trickier and more difficult than software. There’s compliance and safety regulations, and all kinds of things at play. So, we’re more open to partnering within the ecosystem and don’t want to do everything ourselves.”

By using a collection of existing components, the startup believes that it can more easily prove to customers that the product is ready to be on roads. “If you are a big parcel delivery company, for example, you don’t want a truck that’s a research project,” he says. “You don’t want a truck that has brand new components that were just invented six months ago.” The new truck also won’t be autonomous, unlike Tesla’s semi, which has some self-driving features. Others, like Mercedes Benz, are exploring fully autonomous trucks. Thor believes that drivers will have a role to play in transportation for the foreseeable future, particularly on short or mid-range routes–someone like a UPS driver only spends a fraction of their time driving.

All these factors, along with the fact that electric vehicles are less complex than traditional vehicles with internal combustion engines (a traditional diesel truck engine has 16,000 parts, and an electric truck of the same size has 16), meant that the team was able to create a design in six months, with no outside funding. The company is demonstrating the electric semi now and will begin demonstrating other electric trucks later this year.

The company is also partnering with an existing manufacturer with the capacity to quickly scale up production when the trucks come to market in 2019. “I think there are a lot of levers in place right now to make rapid adoption of this technology very much possible,” says Semler. Though the truck will cost more up front than a diesel truck, customers will save on fuel and maintenance over time, making it cost-competitive–but without any of the pollution problems of diesel.

It could be the first cost-competitive electric semi to make it to market, though Tesla is also aiming for 2019. As fleet owners begin to shift away from diesel, the change will impact health–the exhaust can worsen asthma, heart disease, and other illnesses–and the climate. Transportation is now the largest source of greenhouse gas emissions in the United States. “I wanted to do something that was a force of social and environmental change but also had an economic incentive behind it,” says Sordoni, who suffered from asthma as a child. “When we’re successful, we’ll not only be a sustainable business, but also be giving back to the environment and communities when people don’t have to breathe in diesel fumes.”