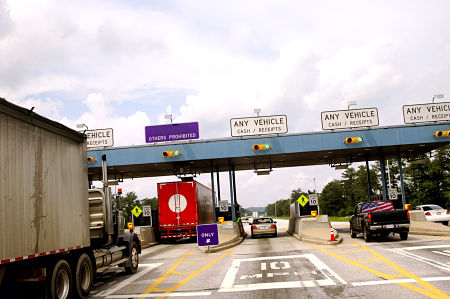 A preliminary plan to improve Interstate 81 between Bristol and Winchester and use truck tolls to pay for it is running into strong opposition.

Virginia Secretary of Transportation Shannon Valentine said the agency has not made any final decisions. Current ideas include two different truck toll prices, making it cheaper to drive overnight.
“We’re just going to look forward to listen to see what businesses and manufacturers have to say in the input we receive,” she added.

“If we could move some of the traffic to the overnight hours, it could really open capacity.”

The draft plan proposes funding 72 previously identified safety and congestion improvements along the 325-mile route between Bristol and Winchester. The General Assembly ordered the study to identify needed improvements and an independent funding source separate of the state’s annual transportation budget.

“The study actually named tolling heavy commercial vehicles, but it didn’t prohibit us from looking at a myriad of different sources,” said Valentine.

“This way, it allows us to compare, contrast and see what kind of funding options might be possible,” she said. “As we worked with the trucking industry, they have been very firm about their belief that everyone should have some skin in the game in supporting improvements along the corridor. We want to make sure, as we go through this, to see the value of different financing options.”

In October, the Richmond-based Alliance for Toll Free Interstates renewed its opposition to the plan by submitting a letter to Valentine’s office.

“Tolling trucks using I-81 will raise costs for moving goods through the supply chain, hurting the competitiveness of local companies. Restaurants, convenience stores, travel plazas and gas stations operating near the interstate will face higher costs from manufacturers and shippers, who will be forced to charge more to transport goods by truck. Everyday consumers will be shouldering the burden by paying more for goods. A toll will become nothing more than an underhanded tax on the general public. Inevitably, truck tolls will have a chilling effect on consumer activity,” the letter stated.

The alliance urged Valentine to not even include tolls as a funding option in the plan presented to the Commonwealth Transportation Board (CTB).

VDOT expects to make its recommendation to the CTB in early December.

“We will present all this to the CTB. Their main focus is going to be the project prioritization, how that was developed, looking at the projects and making sure they are able to recommend that to the General Assembly,” Valentine said. “The funding options, we will be presenting that to the CTB, but the funding options really go back to the General Assembly. They’ll make the funding decisions.”

Brett Vassey, president and CEO of the Virginia Manufacturers Association, told transportation leaders that tolling would not only hurt businesses, it might prompt manufacturers to leave the state. Vassey said his organization represents 5,000 manufacturing firms with 230,000 workers.

“We’re committed to working collaboratively to identify and prioritize projects, technologies and policies that will improve safety and expand capacity along the I-81 corridor,” Vassey said. “However, we cannot support tolling of existing interstates and/or truck-only tolling.”

Vassey said the overwhelming majority of manufacturers along I-81 receive raw goods and ship finished products via commercial trucks.

“Investments are already being held today by companies on this corridor just by the threat of I-81 tolling,” Vassey said. “To be clear, we do not have to pay a toll. We will just move production to another operation. … We have choices, and we are a mobile industry. If the economics don’t work, we will move production to a location where they do. If we don’t have a choice — like our small and medium companies — it just makes them less competitive.”