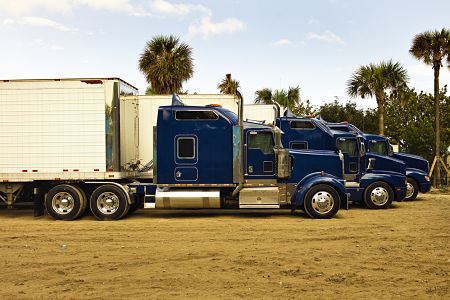 Though an industry-wide driver shortage gets all the ink, trucking’s biggest problem is inefficiency, according to Convoy CEO Dan Lewis.

Lewis says trucks are running across the country empty 30 to 40 percent of the time, and he hopes his digital freight matching company can be part of a solution.

“We think the next big thing in trucking is to actually automate the process of matching those hundreds of thousands, millions of trucks with all of the freight that needs to be moved every day,” he told CNBC.

“Trucks are running down the highway empty, they’re sitting for hours at facilities,” he said. “You can generate 20, 30 percent more capacity just by running the whole system more efficiently.”

Convoy uses software to create what it calls smarter routes that will batch shipments for truck drivers. According to its website, for every one percent improvement in truck routes and utilization, nearly 400 million gallons of fuel can be saved, as well as 100 million hours from being wasted and three billion miles from being driven each year.

Now only three years old, Convoy is part of a technological wave in the trucking industry working to create a more efficient system.

Lewis told GeekWire the philosophy behind Convoy is a simple one.

“Easiest way to think about it is, most of the companies that are shipping freight don’t have their own trucks. They need to get trucks on often short notice. Getting trucks is difficult because there are over a million small trucking companies in the country. Getting access to those trucks takes a lot of work. We take the work out of the problem. We let them figure out exactly what they need to ship. They tell that to us through the technology and then we go out there and we find the right truck for them. We handle everything from end-to-end, taking care of them, handling customer support, getting the truck where it needs to be at the right time,” he said.

Often compared to Uber, Lewis said there are parallels but also major differences.

“The biggest parallel, I think, is that Uber made it lower cost and higher service levels by using technology. I think that, when we think about this business, that is the most important thing we can do. We can actually increase the service levels. We can make it easier for truckers to get more work. We can make it easier for shippers to have trucks on short notice, and know where their trucks are, which is something they don’t usually know today. We can actually offer those better levels of service for a lower price. That’s what Uber did,” he said.

“The other thing is — a big difference, I would say — is that Uber had to essentially go out there and build all their capacity. They had to go get people to drive cars. They had to set up this whole system that didn’t really exist before. One of the things that’s really nice, in our world, is that we’re working with existing trucking companies. These guys are already out there running two or three trucks, trying to grow their business, and they’re looking for work. We can sign up a lot of these entrepreneurs and get them more work without having to sort of go build that from scratch.”

Convoy and competitors like Uber Freight are operating in a booming U.S. economy that is benefitting many industries, including trucking.

In his remarks, Spear highlighted the ongoing campaigns over onerous and duplicative meal-and-rest break rules, driver hours-of-service reform, infrastructure investment, trade and workforce development as top challenges for ATA to continue to engage on.

“With a strong economy, our industry’s challenges just got bigger. The chronic driver and technician shortage is now top-fold, national news – fueled by consumer confidence, a well above-average retirement age, and erroneous claims that our trucks will soon be driverless,” he said. “Beyond the goodwill that comes from engaging our nation’s youth, the fact is, we also need to attract the next generation of drivers and technicians.”