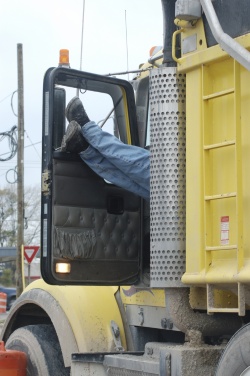 The recent passage of a bill concerning sleep apnea in commercial truck drivers by both the House of  Representatives and the Senate is a positive step for drivers and their companies.

Representatives Larry Bucshon (R-IN) and Dan Lipinski (D-IL) introduced the bipartisan bill into the House  of Representatives. The bill passed by a unanimous vote and then was sent to the Senate, where it also  passed with a unanimous vote on September 26, 2013. This bill ensures that the FMSCA will use the rulemaking process currently in  place to formulate any policies on the issue of sleep apnea in commercial truck drivers. The bill does not  require the FMCSA to create a policy or regulation regarding sleep apnea nor does it specify what a policy  should contain. The bill simply requires that a full cost-benefit and regulatory analysis be included in creating  such policy. This analysis would include the prevalence of obstructive sleep apnea in commercial truck and  bus drivers, the different methods of testing, treatment and monitoring of drivers as well as the estimated  costs and benefits of the proposed policy. The use of guidance by the FMCSA would bypass this analysis as  well as the input of the affected parties and the public.

Shortly after introduction of the bill, the FMCSA announced that it would use the rulemaking process to  address the issue of sleep apnea instead of issuing guidance.

The trucking industry has estimated that the annual cost to screen, diagnose and treat drivers suffering from  sleep apnea would exceed $1 billion dollars. Many in the industry also feel that FMCSA’s use of guidance, rather than issuing a formal rule, would make motor carriers more vulnerable to litigation.

Under previously issued guidance, later withdrawn in April 2012, sleep apnea testing would be required for drivers having a BMI of 35 or greater, and/or a neck circumference of 17 inches or more. It would also require affected drivers to use only expensive medical devices for treatment, when less expensive treatment options are available that are possibly just as effective. Previous research published by FMCSA shows no statistical evidence suggesting that sleep apnea increases the probability or risk of a driver being involved in a commercial motor vehicle crash.

Motor carriers will benefit from the pending legislation in several ways. Carriers will have the opportunity to examine the proposed rules before they become effective. They will also have the opportunity to voice their opinions regarding the cost and effectiveness of proposed rulings. With a specific ruling in place, the carrier will know in advance where they stand in regards to possible litigation in the future. With costs for screening, treatment and monitoring set at a particular level, the carrier can put procedures in place to accommodate any driver affected now and in the future. The carrier would also have the ability to decide whether to have these costs covered under their insurance and to adjust their premiums accordingly.

The rulemaking process could also benefit the judicial entities involved by providing definitive requirements and procedures in the event of future litigation related to vehicle accidents possibly caused by a commercial driver suffering from sleep apnea.

In general, everyone concerned benefits from the FMCSA using the rulemaking process to formulate a policy regarding sleep apnea. While the proposed legislation does not require the FMCSA to draft a policy or the specifics of any policy, the current focus on fatigue related commercial vehicle accidents would seem to indicate the need for such a policy in the near future.