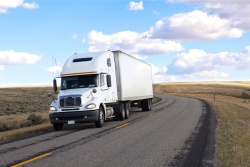 A mass protest of the U.S. federal government began as scheduled in and around Washington D.C. on Friday, but lacked the powerful force organizers had expected.  A few dozen trucks joined a planned highway slowdown that was (and still is) expected to bring the highly travelled roadways to a standstill and gain significant exposure in the process.

The three-day “Truckers Ride for the Constitution” is designed to take over the capital’s highways over the Columbus Day weekend. Organizers had originally hoped to have hundreds of truckers taking part in the protest. Central to the protest: A concerted, massive slowdown where truckers will – legally – slow down and block traffic on the region’s major roadways: I-81, I-495 and I-95.

Both USA Today and the Richmond Times Dispatch said about three dozen trucks took part in the first wave of protests Friday morning. Some of those truckers blocked all four lanes of the highway and circled around the road. Virginia State Police told USA today the truck drivers were warned not to impede traffic but were not given traffic tickets. Traffic camera images from the Virginia Department of Transportation showed a bit of a backup Friday morning on I-495 Northbound.

According to the Washington Post, the Maryland State Police said truckers caused no problems in that state.

As part of the protest, a handful of truckers also convened at the national World War II Memorial to hand a “list of demands” to Rep. Louie Gohmert, R-Texas. The truckers asked Congress to stop trying to increase insurance requirements for truckers, pushed for additional trucker safety measures and called for an end to uncompensated detention time for truckers at stops.

The lukewarm turnout for the event may be attributed to confusion over what the protest actually stands for.  Chris Hemmer, who runs the Truckers to Shut Down America Facebook page, told The Atlantic the original intent of his proposed protest was to condemn high fuel prices. The protest was only supposed to take place Friday and had asked truck drivers to refrain from spending money or making deliveries – to draw attention to corporate America’s control of gas prices.

Hemmer said all that changed.

Hemmer maintains that Zeeda Andrews, a former country music star and the individual who is often dubbed the official spokesperson for the event, got involved and made the movement a three-day affair that’s more about Tea Party concerns – like impeaching President Obama and calling for reforms in Congress. Hemmer told The Atlantic: “She pretty much has destroyed things.”

Adding to the confusion, Georgia trucker Earl Conlon told U.S. News earlier this week that some of the trucks might stop completely and try to arrest members of Congress. Andrews denies that was ever an option, according to USA Today.

Truckers and supporters who can’t make it to Washington are encouraged to be heard wherever they may be. No major incidents were reported Friday, but a handful of people gathered on an overpass of I-90 in Buffalo, NY, and hung signs that said “Honk if you’ve had enough.”

Truckers are expected to block the roadways in eight-hour shifts throughout the weekend. Organizers are adamant that all protest will be conducted legally – with a highway lane kept open for any potential first responders. Commuters who display the group’s Twitter hashtag – #T2SDA – will also be allowed to pass.

Social media users were quick to poke fun at the low turnout Friday night. Twitter users sent the group pictures of mock protests made of Legos – and trucks in children’s sandboxes.

But protest supporters said Friday night that even one person receiving the message was worth their effort, and they remain undeterred as they try to get their point across throughout the weekend.